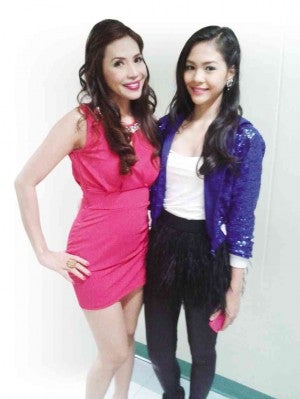 JENINE Desiderio and Janella Salvador team up for a worthy cause. courtesy of jenine desiderio

Jenine Desiderio, who lost her mother to cancer when she was six, said her family was disappointed when she decided to become an actress/singer rather than a doctor.

“I took up a pre-med course at UST (University of Santo Tomas), but dropped out two years later when ‘Miss Saigon’ came along. I thought of becoming a doctor because my mom died of cervical cancer. I wanted to help fight it, to help those suffering from it. Had it not been for ‘Miss Saigon,’ I would have been a doctor,” said Desiderio during the launch of the advocacy campaign “X Means Love.”

The campaign, initiated by the pharmaceutical company GlaxoSmithKline, aims to encourage preventive measures against cervical cancer, the second most common cancer among Filipino women.

Desiderio said everyone expected her to be the first doctor in the family. “Everything had been planned. An aunt in New York City promised to help me find work there after I graduated. They were all disappointed when I joined ‘Miss Saigon.’ At that time, the show was still unheard of. I was a member of the pioneering cast. It didn’t help that I had to wear a bikini… My family is very conservative.”

Desiderio was among the Filipinos who played the lead role of Kim in the hit musical that premiered in London, United Kingdom in 1989. Other “Kims” were Monique Wilson, Jamie Rivera and Lea Salonga, who won both the Laurence Olivier and Tony awards for her performance.

Desiderio said her relatives eventually “learned to accept and appreciate what I did in the show.” She added, “Eventually, we were able to produce doctors… The experience with ‘Miss Saigon’ turned my life around. I owe everything I have now to the show, which will turn 25 next year. I have no regrets.”

Desiderio said she barely remembered her mother Resurrecion. “She would welcome us home when we arrived from school. She enjoyed cooking… Her cancer was already in Stage 4 when we found out. She was given only three to four months to live. She survived for six months.”

Watching her mother grow weak before she passed away was traumatic for Desiderio. “This was in the 1970s. She only had cobalt treatment. Chemotherapy was available only in the United States. The most we could do was make her comfortable. She didn’t lose her hair but she bled profusely. She was comatose for a very long time.”

Desiderio’s four older siblings cared for their mother. “(My) grade school was just across the UST Hospital. My family enrolled me there for convenience but there were times when they forgot to fetch me. I got used to sleeping in the dormitory of the nuns running the school. I never told them my mother was sick. They found out only after one of them, who often assisted in tending to the sick at the hospital, saw me there. They became more supportive and understanding after that. I was very grateful.”

Following her mother’s death, Desiderio’s family became extremely cautious. “I grew up believing  the myth that cervical cancer was hereditary and  could be passed on to the youngest female offspring,” she explained, “so, when I started having my monthly period, I underwent the pap smear test every year. My family monitored my health, worried that my mother passed on the cancer cells to me when I was still in the womb… having a pap smear test annually has become a habit.”

Now that she is a mother herself, Desiderio said she feared getting sick and not being able to take care of her own kids. She has two—Janella, 15, and Russell, 3.

“What the doctors say is true—you have to care for yourself first before you can take care of your loved ones,” she said. “This is why I agreed to join the GSK campaign. I know how hard it is to lose a family member at a young age. I will not let my children experience the same thing.”

According to studies, 12 Filipino women die of cervical cancer every day. The disease is caused by the Human Papilloma Virus (HPV). It may remain undetected for as long as 10 years as the infection may not show any signs or symptoms.

GSK partnered with the ABS-CBN Foundation and other medical and nonmedical organizations to raise awareness of cervical cancer. Along with Desiderio and daughter Janella, GSK also tapped actor-television host Toni Gonzaga and TV news correspondents Ginger Conejero and Marie Lozano for the “X Means Love” campaign.

“My daughter (will get) vaccinated this year. I’m hoping she gets a free day from work soon,” Desiderio said. Janella, her daughter with 1990s rock star Juan Miguel Salvador, is a cast member of the popular morning soap series “Be Careful with My Heart” on ABS-CBN.

“I’m a very hands-on mom,” Desiderio told the Inquirer. “I prepare for both my kids. It’s tough because they have different requirements—one is a teenager and the other, a toddler. I could have hired a driver and a yaya for Janella, but I chose not to because I want to know her whereabouts. I want to cook for her personally. I want to make sure she eats well. I also want to see who she hangs out with.”

Desiderio said she made sure Janella was well aware of the deadly cervical cancer. “She knows all about cancer. She’s had her brushes with illness when her grandmother and aunt got sick and eventually died of the disease. She had been very close to them. I will do everything I can to make sure she is healthy and safe.”

Read Next
President LT takes charge
EDITORS' PICK
Notice of 2020 regular meeting of stockholders June 18, 2020
SM prepares for ‘safe malling’
Leveling up your ‘lutong bahay’ with the kitchen companion you never knew you needed
NBI, Immigration to join hunt for ‘underground’ medical clinics
2 Chinese nationals arrested in raid on another unlicensed COVID-19 hospital in Pampanga
P2.2 trillion in losses: Cost of COVID-19 impact on PH economy
MOST READ
NCR is ready for GCQ — Palace
Revillame tells Roque: ABS-CBN is in my heart despite being in rival network
Filipino kids in Ireland orphaned due to COVID-19
Metro Manila mayors told: Keeping bus, jeepney ban ‘catastrophic’
Don't miss out on the latest news and information.