What Maja has learned in 10 years in show biz 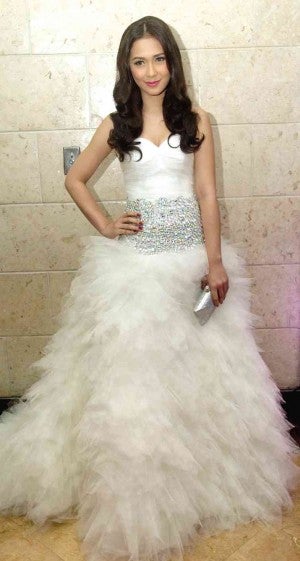 “IT’S okay to make mistakes as long as you learn from them,” says the Dance Princess. ROMY HOMILLADA

When faced with show biz intrigues, Maja Salvador says she reminds herself that other celebrities have figured in worse controversies “and then I pray.”

The actor says she has long accepted that intrigues are part of being a celebrity. She has been romantically linked to fellow actors John Prats, Coco Martin, Matteo Guidicelli and, currently, Gerald Anderson (which caused a rift between her and her friend Kim Chiu, his former girlfriend). She also got a lot of flak online from Chiu’s supporters.

“I deal with bashers by blocking them out. Most of the time, I simply keep quiet. I refuse to let them ruin my day,” says Salvador, who adds she is no longer “addicted” to Twitter and Instagram.

“Now, I’m very careful with what I post online. I only share the best moments of my life,” she says.

Salvador, who was introduced recently as the endorser of Coby’s newest line of tablet computer, Kyros, says she is also careful about sharing her opinion on her social media accounts.

“Bashers are always on the lookout [and] are just waiting for you to make a mistake. They attack when they get the opportunity. There’s a risk that a well-meaning comment could be taken out of context.”

Salvador now limits access to her accounts to friends and colleagues. “It’s always better to take action on an issue rather than merely complain about it,” she points out.

She is currently celebrating her 10th year in the business with a series of shows in key cities. “I’m thankful to still be a part of the industry. It’s hard to stay where I am so I work really hard,” she says. “Popularity and stardom will eventually come to you. You just have to be patient. While waiting, make yourself busy with worthwhile projects.”

Salvador joined show business in 2003 as an ABS-CBN contract artist. In 2012, she played the title role in Paul Soriano’s aspirational drama “Thelma,” which won her acting awards from the Manunuri ng Pelikulang Pilipino and the Film Academy of the Philippines.

She considers her awards as career milestones. “More than win awards, I hope to make movies that will be appreciated internationally.”

Salvador is also proud of the title Dance Princess. “We have a lot of good dancers around. I really have to work hard to prove I deserve the title.”

She also considers working on the defunct drama series “Ina, Kapatid, Anak” a feather in her cap. “Viewers really loved the show … after working on it I said to myself, ‘I’m ready to be an actress.’ I used to lack self-confidence. Now, I feel I’m ready to take on more challenging roles.”

Salvador claims to have learned a lot in the 10 years she has been an actress. “I have no regrets whatsoever … I still make mistakes—I still [accept] projects that [do not seem] suited to me… I just work doubly hard so as not to disappoint my bosses,” she says. “It’s okay to make mistakes as long as you learn from them. If you fall, try to get back on your feet quickly, carry on with your life, enjoy it. That’s exactly what I’m doing now.”