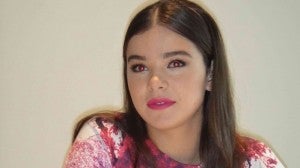 BUSY as a bee, Hailee has seven films lined up. Photo by RUBEN NEPALES

LOS ANGELES—Hailee Steinfeld has done seven films, including “Romeo and Juliet,” since her Oscar-nominated feature-film debut performance in “True Grit.” So, the talented 16-year-old, pretty in a pink printed blouse and miniskirt, said in my recent chat with her, she has not seen much of her family, including Filipino relatives.

“Not as often as I’d like to,” Hailee said. Her mom, Cheri, who was in the back of the room, traces her roots back to Bohol. Hailee fondly calls her maternal grandpa, Ricardo Domasin, “Papa.” Her great grandfather, Peter Domasin, was the one originally from Bohol. Hailee’s dad is also named Peter.

“I have been traveling so much lately,” Hailee added. “But when the family does get together, it’s definitely an occasion.”

I took the chance to give copies of my book, “My Filipino Connection: The Philippines in Hollywood,” to Hailee, who quickly noticed that Darren Criss was one of her fellow Fil-Ams featured along with her on the cover. Cheri said she looked forward to showing the book (available at National Book Store in the Philippines and on amazon.com) to her family.

In the book, I mentioned that Hailee’s uncle, Larry Domasin, was a child actor whose credits include costarring with Elvis Presley in the 1960s film, “Fun in Acapulco.” I asked Hailee if her uncle Larry’s acting stint somehow inspired her to become an actor, too. “It’s interesting because I [can’t really say I] come from a family of actors,” she replied. “There have been a few [relatives] like my uncle Larry, who has done a few things. The thing I admire the most is that he did [some acting] because he loved it and had a great time. He did it as long as he wanted to. And he has a great life now. I love seeing him. He’s great.”

Hailee said she still dreamt of seeing the Philippines, especially Bohol. In fact, with a blooming career, she hopes to make a film in the Philippines. “Every place I want to go to is a place where I hope to shoot a film,” she said.

(After the interview, we chatted briefly about Filipino food. Saying she was picky, Hailee singled out one good meal she had in a Filipino restaurant—in Glendale or Pasadena, she was not sure.)

“I have been busy,” she said with the sweetest smile. Quite an understatement. “I have done ‘Romeo and Juliet’ and ‘Ender’s Game.’ Two of my films, ‘Can a Song Save Your Life?’ and ‘Hateship Loveship’ were bought in Toronto. I have a few more—I am losing track!—‘Three days to Kill’ and ‘The Keeping Room.’” Add Tommy Lee Jones’ “The Homesman” to that list.

Hailee said she would always be grateful for her major break in the Coen brothers’ acclaimed “True Grit.” “I always refer back to my experience on ‘True Grit.’ That was my first film and every single thing that I learned in those three months has traveled with me everywhere. I have since had the opportunity to work with so many incredible people. In ‘Can a Song Save Your Life?’ I worked with Mark Ruffalo and Keira Knightley, whom I admire and look up to. They were so supportive and helpful—like everyone else I have worked with. In ‘Romeo and Juliet,’ my experience with Lesley Manville (who plays the nurse) sticks with me.”

Landing the Shakespearean heroine was a coup for the young actress. She plays against Douglas Booth’s Romeo in director Carlo Carlei’s retelling of the classic story, as scripted by Julian Fellowes (“Downton Abbey”). “The casting came about very quickly. I received a phone call and, I remember thinking, to even be considered for a part like this is such a huge honor.

“After that, I went immediately into dialect training. We spent a week or two in Italy before we started filming. That always helps so much—immersing yourself in the culture and working with the wardrobe, locations. Everyone and everything has such an impact on my performance that I am truly thankful for.”

I urged her to talk some more about her coming films. She obliged: “‘Ender’s Game’ is an epic adventure. I play a character named Petra Arkanian, the only girl in the army that Ender is placed into. They become really good close friends, and help each other out in that world.

“In ‘Can a Song Save Your Life?’ I play Mark Ruffalo’s daughter, a lost teener trying to fit in—she basically does what she can. Her dad comes into her life at a time when she really needs him. They rekindle their relationship. It’s a beautiful coming-of-age story.

“In ‘Three Days to Kill,’ I play Kevin Costner’s daughter. In some ways, she is similar to my character in ‘Can a Song.’ This is a girl who is, again, trying to fit in. She has moved to Paris with her mom. It’s a whole different world. She takes the Metro to school. She is trying to make it as if it’s normal for her.  She puts on a façade until the end of the movie, where you see her for who she really is. She reconnects with her dad. It’s a really beautiful story.

“‘The Keeping Room’ is about two sisters and their female slave during the Civil War. I play the younger sister to Brit Marling. It’s about these women who are by themselves on their property. Two Union soldiers who have broken off from the war come to invade their space. It’s a really beautiful story of three powerful women fending for themselves.”

Back to “Romeo and Juliet,” Hailee said filming in Italy was quite a contrast from acting in front of a green screen in “Ender’s Game.” “Very different,” she stressed. “It was one of the most interesting things I’ve done—going from filming a story in the actual location it was set in to going in front of a green screen for three months. So that was definitely a departure, really opposite sides of the spectrum but it was really interesting. 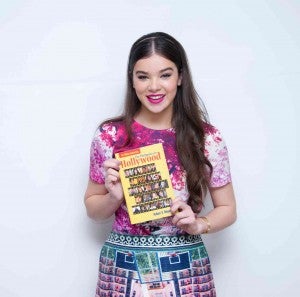 HOLDING up a copy of author’s book of celebrity interviews. Photo by Ruben Nepales

The teenage actress admitted that she had never fallen in love. “I can’t really say…I would be able to tell you if I knew, but I haven’t. I have to agree with Julian (Fellowes) that ‘Romeo and Juliet’ is a symbol of first deep love. Obviously, the way that story is told is very dramatic. Everything, apart from their love—the inner conflict, the feuding families, and just everything going on makes it so exciting when they are together. That’s the way it’s supposed to be, that no matter what anyone is telling you on the outside, you should love who you want to love. But I’m 16 and I don’t really know much about love.”

Poised and articulate, Hailee is growing up into a young lady. On how she kept herself solid in a profession where drugs and alcohol claim many young lives, Hailee explained, “I owe my parents a lot, the way they brought me up. It was sort of a strict household, where I learned right from wrong. I am home-schooled. It’s interesting because, as much as I feel that I am not part of that stuff, I do see it happen all the time. I am actually fascinated by it because I don’t really understand it.”

Hailee has taken to social media, especially Twitter, very well. “I recently became very big in the social media. It’s so interesting to me that I will get a message from somebody on the other side of the world, saying that they are so excited to see ‘Romeo and Juliet.’ It’s so crazy because, first of all, I always think, how do they know? Other than that, it’s incredible to connect with your fan base and talk to people who are excited about and admire your work. It’s always really flattering. I have yet to have one of those crazy fan experiences.”

On being the face of the fashion house, Miu Miu, Hailee recalled, “I did a campaign for them a couple of seasons ago. It was a wonderful experience. After I was flown to Paris to see the Miu Miu fashion show—t was my first fashion show, my first Fashion Week, it was unreal. The designers, models and the shows—they put on such a production. It’s so incredible. I really felt like I was introduced to fashion on another level. Fashion has become a really big part of my life.”

As Hailee plunges from one film project into another, does she have time to map out the kind of future she’d like to have? “I have moments where I will sit and think about what I will be doing in a couple of months or years from now. But because there is so much going on right now, I find it easier to take it day by day. Before you know it, you will find yourself thinking about many months and years into the future so I think it’s less stressful to take it day by day. It’s easier to take it all in that way. But I definitely have times where I am really interested in what the future will be like but there’s only so much you can do thinking about that.”