Jury out after five-month Jackson-AEG trial 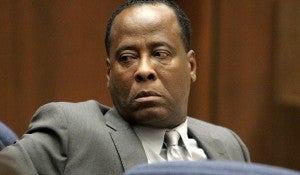 LOS ANGELES – The jury which will decide if tour promoters AEG Live should pay massive damages to Michael Jackson’s family over his 2009 death began considering its verdict Thursday.

The six-man, six-woman panel retired to deliberate after a last appeal from Jackson family lawyer Brian Panish, who said AEG Live were trying to “hoodwink” jurors and shirk blame for the singer’s demise aged 50.

“AEG Live is a money-making company,” he said, accusing the promoter of negligently hiring Conrad Murray, the doctor found guilty in 2011 of causing Jackson’s death while he was preparing for his “This is It” comeback tour.

“They didn’t want to help Michael do a comeback. They wanted Michael so they could make money, and that’s why they did it,” he said. “They think they can hoodwink you,” he told the six-man, six-woman jury.

The panel deliberated for a couple of hours before going home for the day, to resume their discussions on Friday morning.

Jackson died on June 25, 2009 from an overdose of the anesthetic propofol at his rented mansion in Los Angeles, where he was rehearsing for the shows at London’s 02 Arena.

Murray, a cardiologist, was convicted of involuntary manslaughter in a criminal trial in 2011 for giving the drug to the star – who suffered from chronic insomnia – to help him sleep. Murray was jailed for four years.

In the civil trial, the singer’s mother Katherine Jackson, 83, alleges that AEG Live negligently hired an inappropriate and incompetent doctor and missed a series of red flags about the star’s failing health in the run-up to his death.

The “This is It” tour was Jackson’s bid at a comeback four years after his infamous child molestation trial. He was acquitted, but his image was destroyed, and he desperately needed to make money.

The Jackson family wants AEG Live to pay $85 million to each of the star’s three children – 16-year-old Prince, Paris, 15, and 11-year-old Blanket – for emotional loss, and an unspecified amount for economic losses, estimated at up to $1.6 billion. AEG’s lawyers call the figures “absurd.”

If the jurors do decide to award damages, they must then decide how much Jackson was responsible for his own demise, and agree a percentage by which the dollar amount will be multiplied.

Panish suggested in his closing argument Thursday that Jackson was 20 percent responsible.

AEG Live’s lawyer Marvin Putnam dismissed the Jackson camp’s figures as “speculation and guesswork,” based on the unlikely premise that the star could have kept touring until the age of 66.

A key issue in dispute is whether AEG Live actually hired Murray, before Jackson’s death. A copy of a contract signed by the doctor, but not AEG or Jackson, was found in Murray’s car after the singer died.

In his last appeal, Panish highlighted nine emails which emerged during the trial including one from AEG executive Paul Gongaware, in which he said: “We want to remind (Murray) that it is AEG, not MJ who is paying his salary.”

Thomas Mesereau, who successfully defended Jackson in his 2005 child molestation trial, was in court Thursday for Panish’s last appeal. “I think Brian Panish hit it out of the ballpark,” Mesereau told reporters.

Dozens of fans have attended the final few days of the trial this week. On Tuesday some cried and hugged each other in court when Panish showed a 15-minute video of Jackson’s greatest hits combined with home-movie clips.

On Thursday, they were reflective, as the jury retired.

“I’m relieved that it’s over after five months,” said Patricia Zwagerman, from Marina Del Rey, just outside Los Angeles. “I feel that a lot of the truth has come out, and I just hope for a positive verdict for the Jacksons.”