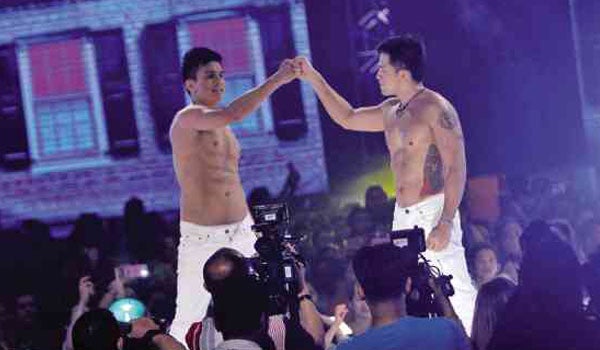 Expecting another steamy experience, some women and bekis who trooped the 2013 Cosmopolitan Bachelor Bash on Tuesday were disappointed.

The event, held at the World Trade Center in Pasay City, didn’t have last year’s level of audacity—with men who chucked their briefs and strutted the runway wearing nothing more than flimsy towels, then made the crowd crazy by flashing their butts. 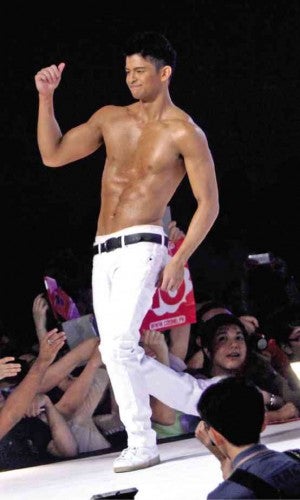 Fashion mag Cosmopolitan’s 2013 boyfriend buffet, though, had guys in thongs (but with faces in masks) doing their version of the Oblation Run. The deafening screams lasted a full minute.

“Cosmo University”—the theme this year—had “My Husband’s Lover” star Dennis Trillo brandishing a water pistol and firing at (very) willing victims. Bekis held their breaths when Dennis walked the ramp with “MHL” costar Tom Rodriguez. “For a while there, I thought they would kiss,” said a crestfallen gay. Dennis and Tom, certified straight guys, play gay lovers in the hit primetime soap.

Actor Rayver Cruz danced down the ramp and was cheered the loudest when he knelt at the edge of the stage to give delirious fans a few seconds to check out the goods.

Cosmo’s 2013 top cover boy Alden Richards ditched his boy-next-door image to walk the wild side that night. Three barely clad women cut off his shirt and pants with large scissors and doused his body with oil. Alden then plucked a screaming girl from the crowd, bussed her on the cheek and had her wrap her arms around his gleaming torso.

“That was spontaneous. I had to keep the audience engaged,” Alden later told Inquirer backstage. “Everything was on-the-spot, except teasing the crowd by tugging on my boxers, which I thought of during rehearsals.” 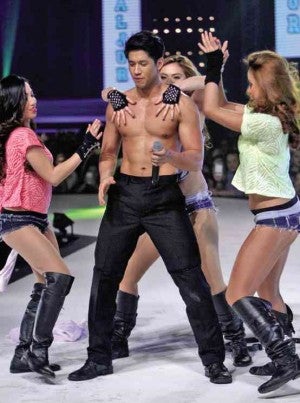 One segment fulfilled female fantasies: a virtual glimpse inside the men’s locker room. The eye-popping video showed a group of über-sexy men  in white  bikini briefs taking a long, smoky shower. Screams pierced the hall’s high ceiling when the men in the video materialized on the catwalk, in bathrobes and towels.

Participating in the program attended by an estimated 2,000 guests were 69 of the sexiest male celebs. Former Cosmo centerfolds Hideo Muraoka, Jon Hall and Pancho Magno turned up as “hunky professors.” Actors Arron Villaflor, Rodjun Cruz, Vin Abrenica and Vince Velasco  came out in a segment that featured a cafeteria dance showdown between “randy rebels” and “sexy nerds.” 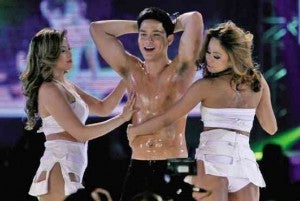 By midnight, the year’s Top 10 Centerfolds—Dennis, Tom, Alden, Rayver, Aljur Abrenica, Sam Adjani, Vince Feraren, Sam Concepcion, JC de Vera and Matteo Guidicelli—were onstage, zealously strutting their stuff. In tight white jeans, they teased the nearly-drooling audience by acting as if they were about to drop their pants.

To pick the Top 10 Centerfolds annually, Cosmo Philippines editorial director Myrza Sison said she and her staff went for “the hottest, best-looking and most popular male celebs.”

Sison told Inquirer: “It’s always a difficult process, filled with much discussion and debate, but so much fun. As for the 69 Bachelors, we round up a fresh batch every year, starting our series of castings four to five months ahead.”

“It feels great when you’re on the ramp,” Alden said, catching his breath. “The energy backstage was amazing,” added Matteo. “Before going out there, I was scared that the audience wouldn’t react to me. I’m so glad they did.”