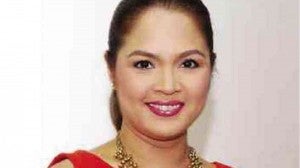 JUDY Ann Santos has learned to be “not too sensitive.”

“It’s all about loyalty,” talent manager Alfie Lorenzo explained when asked why his ward Judy Ann Santos renewed her contract with ABS-CBN.

Despite being vocal about having disagreements with her Kapamilya bosses, the actress finally signed a two-year guaranteed deal with the network recently.

“It’s true that she received offers from other networks [which] promised to double, even triple, the money she was getting from ABS-CBN,” Lorenzo told the Inquirer. “For a while, I also thought she would join Ryan (Agoncillo, Santos’ husband) if he signed up with either TV5 or GMA 7.”

However, Lorenzo pointed out, Santos had  been with the Kapamilya network for 20 years, and would like to celebrate her silver anniversary there. The actress’ new contract will have her hosting the local franchise of the American game show “Bet on Your Baby.”

Santos will also host another game show and appear in a drama series before the end of 2015, Lorenzo reported. “She will have TV guestings in between,” he added.

“I kept telling Juday (Santos’ nickname) that she had worked with ABS-CBN for such a long time that she had imbibed all her martyr characters,” he said. “Gusto na niya ’yong inaapi siya. She is naturally kind and giving, so that people sometimes abuse her.”

Lorenzo added, “Juday told me, ‘Gano’n lang talaga kapag pamilya. You argue, but you reconcile after a while.’”

Last month, Santos cried during a press conference to promote the finale week of her drama series “Huwag Ka Lang Mawawala.” She admitted to feeling disappointed that the network bosses had moved the program to a much later time slot, which led to the “mutual decision…to end the show.”

In a statement sent to the Inquirer on Friday, Santos said, “I’ve learned to let go of negative vibes and to accept life’s realities. I also realized that I shouldn’t be too sensitive or take things too seriously.”

Lorenzo recalled that Santos asked for a week-long break after receiving a draft of her latest contract. “She said she wanted to study it carefully. Sadly, her break was spent taking care of Ryan, who had dengue, and then pneumonia. I guess she was able to do some soul-searching in the hospital,” he said.

Santos opted not to work on any movie project this year to concentrate on her TV shows, reported Lorenzo. “She has received offers from Studio 5, GMA Films and Regal Entertainment, but she also wants more time for herself and her babies.” Santos and Agoncillo have a son, Lucho, 3, and an adopted daughter, Yohan Lois, 8.

Read Next
Because a woman’s life is a game of chance
EDITORS' PICK
Palace: Malls, establishments may require customers to use of face shields
Syringes for Pfizer vaccine arriving on December 2 — NVOC chairperson
Smart offers wireless fiber-like speeds to Filipino homes with country’s first 5G Prepaid Home WiFi
Legarda: Ending Violence Against Women, a cause for all
This new condo in the South will make you want to turn a new leaf
Disease expert: Omicron variant may behave like Delta
MOST READ
Bongbong Marcos to face another disqualification case
Christine Bersola, Julius Babao cleared of cancer after colonoscopy, endoscopy
Former PM Abe says Japan, US could not stand by if China attacked Taiwan
Tropical storm intensifies as it approaches PAR
Don't miss out on the latest news and information.