“I’m 50 and [I] feel that this is the right time to do it,” says actress Cherie Gil on her decision to produce her independent movie “Sonata,” currently in cinemas.

“[I’m] first and foremost an actor, but I want to grow,” Cherie points out. “At this time when Filipinos are widely recognized abroad, it’s my dream to also walk the red carpet in Cannes.”

Cherie says she is very excited to be venturing into film production. For this purpose, she has put up Myownmann Productions Inc.

“It’s been five years since I separated [from violinist husband Rony Rogoff]— there’s no movement,” she notes. “I’m proud of what I’ve done so far, but I want to move forward.”

“Sonata,” directed by Peque Gallaga and Lore Reyes, is one of 11 entries in the 2013 Sineng Pambansa Film Festival All-Masters Edition, which ends Sept. 17.

Cherie is also set to produce a film featuring her brother Mark Gil, with his son Sid Lucero. She says: “I thought it’s time we showed a movie about men going through the problems of fatherhood. This is going to be an astig (gutsy) kind of film. It’s always hard for men to talk about feelings that’s why I want to tap into that. I asked Erik Matti to direct it and Sarge Lacuesta to write it.”

Cherie says she has maintained a good relationship with her husband, so much so that the world-renowned musician even contributed funds to her production.

Cherie shares with the Inquirer: “Rony has always been supportive. I wanted to produce a stage play before, ‘Sunset Boulevard,’ but didn’t push through with it. I told Rony that  ‘Sonata’s’ story was very close to that of ‘Sunset Boulevard’ so, without question, he put in money and didn’t even ask for a contract. You will see in the movie that I used the name ‘Cherie Gil E. Rogoff’ as executive producer. Officially, I’m still married to him.”

“Sonata” tells the story of Regina Cadena (Cherie), an opera diva on the verge of a nervous breakdown after losing her voice. She returns to her home province, Negros Occidental, and through a young boy, Jonjon Palma (Chino Jalandoni), rediscovers her life and art.

Cherie and her Israeli husband broke up in 2008. She says the separation was a “mutual” decision. “It was for the best of everyone. Rony lived up to our agreements. We continued talking because we shared the same intention—to bring up our children with love and respect for each another,” the actress explains.

The ex-couple has two kids—Bianca, 18, and Raphael, 16. Cherie’s son from a previous relationship, Jay, is 27. 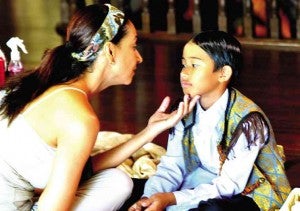 “The two kids are with him in New York. We’ve never made an issue of it,” she notes. “He’s a doting dad. He is semiretired and has decided to give all his time to the kids. I can’t thank him enough for that. If not for him, I wouldn’t have this freedom to do what I want at this point.”

Cherie describes her relationship with her kids as “very unconventional,” but adds, “may pagmamahal naman.”

“We just had some issues about logistics and geography because their dad is a foreigner and my work is here,” she says. “He has them in the morning and I have them at night, via Skype.”

She is visiting them next month, Cherie volunteers. “It would be harder for them to come here because Bianca plans to take up acting in college. I once told her, ‘Bianca, being an actress in New York City could mean chronic unemployment!’ She replied, ‘But I’m at my happiest when I’m on stage.’”

Cherie says her oldest son is doing well on his own. “Jay took up sound engineering in school and he is now doing exactly that at a big dinner theater in the Village. My youngest is still a baby. He doesn’t know it, but I think he’s a natural actor. Right now, he likes sports. Being in New York keeps these kids steady. They are able to live normal lives there.”

Read Next
‘Birthing pains’ for masters fest
EDITORS' PICK
Pandemic prognosis: Where does it go from here?
Legarda: Ending Violence Against Women, a cause for all
Smart offers wireless fiber-like speeds to Filipino homes with country’s first 5G Prepaid Home WiFi
This new condo in the South will make you want to turn a new leaf
Google won’t accept election ads for 2022 national polls
House OKs bill allowing married women to retain maiden surname
MOST READ
Bongbong Marcos to face another disqualification case
Christine Bersola, Julius Babao cleared of cancer after colonoscopy, endoscopy
Former PM Abe says Japan, US could not stand by if China attacked Taiwan
Pacquiao showers cash to 4,000 people in 2-day sortie in Agusan
Don't miss out on the latest news and information.