‘Otso,’ because cinema is eternal 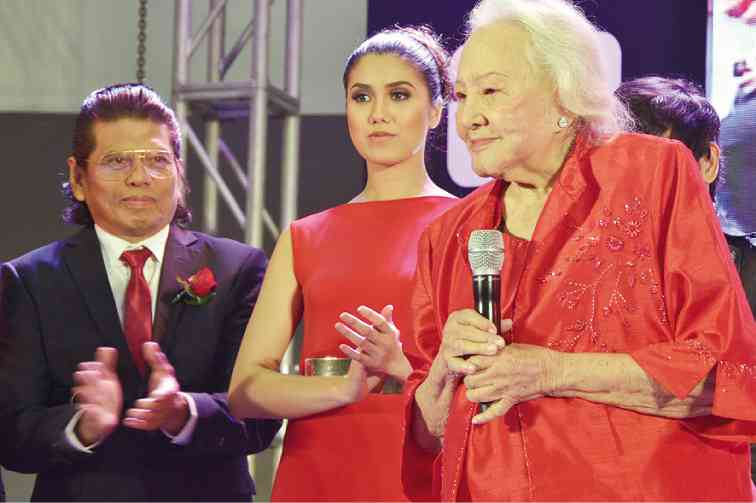 AT THE FESTIVAL’S opening (from left) Elwood Perez, Monique Azerreda and Anita Linda

“Reinvigorated” is how filmmaker Elwood Perez describes his mindset during the shoot of his comeback movie, “Otso,” an entry in the ongoing Sineng Pambansa All-Masters Edition, presented by the Film Development Council of the Philippines (FDCP).

Perez, who last made a film a decade ago (2003’s “Ssshhh … She Walks By Night”), had been hemming and hawing for so long about returning behind the camera.

To think, his father had gifted him with a digital camera five years ago and the filmmaker had been toying with all sorts of concepts since.

It took FDCP chair Briccio Santos and a series of seemingly propitious coincidences to drag Perez out of semi-retirement.

He had spent his hiatus watching movies and plays and reading books, during which time, he met stage actor-director Vincent Tañada of Philippine Stagers Foundation through theater stalwart Frank Rivera.

“Vincent invited me to watch his play, ‘Ang Bangkay’ in their studio in Manila,” Perez recalls.

Perez was impressed by Tañada, a Palanca- and Aliw-winning playwright and director who happens to be a lawyer, too, and a grandson of the late Sen. Lorenzo Tañada. (“Ang Bangkay” won first prize in the full-length play division of the Palanca last year.) “I was looking for an actor to play the lead character in my film,” Perez recounts. “[I found] Vincent perfect for the role of a writer … because he is a writer.”

As bonus, Perez got to tap Tañada’s troupe of young actors, including Miss Teen Philippines 2005 Monique Azerreda. “The kids worked both behind and in front of the camera. I liked their no-nonsense work ethic. Theater provides good training ground for budding artists,” says Perez, who started in campus theater in the 1960s as a pre-med student in the University of the East.

“Otso” also served as Perez’s homecoming to his beloved neighborhood in Manila, Balic-Balic in Sampaloc. “I spent my teenage years there. I watched movies at Premiere Theater in Balic-Balic, Rainbow in La Loma, Holiday in Sta. Mesa, Scala on Avenida, Society on Echague,” he recounts. “I saw 1930s double-bill movies, 1950s musicals … everything.”

For “Otso,” he thought of matching film newcomers Tañada and Azerreda with veterans Anita Linda, Jun Urbano and Vangie Labalan. The synergy between the tyros and vets was electric, Perez notes.

“I loved my scene with Ms Anita,” Tañada relates. “We kept crying … It was easy for  me to get emotional because I was close to my late maternal grandmother.”

Although familiar with Perez’s body of work, Tañada was nonetheless disoriented by filmmaking, which he found, by his own admission, totally different from theater.

“I would often prepare extensively before each shoot,” Tañada owns up.

On the set of “Otso,” however, Tañada came to expect the unexpected with Perez’s improvisational style. “Each scene was a moment of discovery for me,” the actor confesses.

Azerreda, who is too young to have caught Perez’s heyday in the 1970s and 1980s, did a little research. “I Google-d his past movies and noticed that some titles were sexy. I was at first scared that my role would be daring, but I eventually had complete trust in him,” she says.

The kids’ youthful energy is infectious, Perez admits. “We finished the movie in seven days. It was not uncommon for us to shoot nine sequences a day.”

That he finished “Otso” without a hitch in so short a time dispelled all the nasty talk surrounding Perez in the local scene. “There were all sorts of rumors in the mainstream … mainly, that I was difficult to work with. This proved them all wrong …  so much so that Viva green-lit one of my scripts.”

He has another indie in the works, “Object of Desire,” which will headline balladeer Ronnie Liang.

Perez is undoubtedly on a roll. What’s the word again? Recharged.

There are other concepts and scripts brewing in his filmmaker’s pot, but the question remains: Why is his latest film titled “Otso”—or, in English, “eight”?

Actually, it refers to something more mundane. “The car license plate of congressmen is 8.” The film presciently touched on the pork barrel scam. (It was filmed during the May mid-term elections, long before the scandal broke.)

“But the figure can also allude to infinity. It can mean so many things,” Perez says. Like cinema itself which is multi-layered and eternal, he asserts.

The Sineng Pambansa All-Masters Edition is ongoing at SM Cinemas nationwide until  Sept. 17.