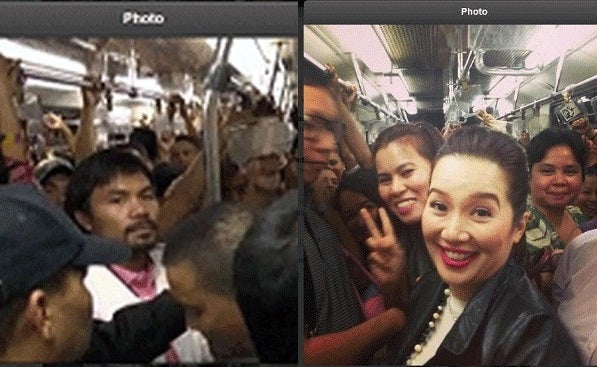 Screengrabs of Manny Pacquaio and Kris Aquino while onboard the Metro Rail Transit.

But the unusually heavy traffic due to flooded streets Tuesday evening compelled the two celebrities to get off their luxury cars and take the country’s crowded train.

Kris was supposed to host a sponsored event at Shangri-La, a mall along the MRT’s route on Edsa, the ABS-CBN corporate communication office told the Philippine Daily Inquirer Wednesday.

The youngest sister of President Benigno Aquino III had bodyguards with her during the short trip.

He boarded the train at the Ayala Station and alighted at GMA Kamuning.

The Filipino boxing hero, who was on his way to a Christian fellowship, took a walk from the MRT station to the venue of the religious event inside the ABS-CBN compound as Quezon Avenue was submerged in floodwaters, said ABS-CBN.