By: Nestor P. Burgos Jr. - Correspondent
Inquirer Visayas / 12:39 AM September 08, 2013
ILOILO CITY, Philippines–Teresita Sajonia left Singapore16 years ago as a nanny but returned to the city-state in August a celebrity.

On Aug. 24, Sajonia attended the gala premier at Marina Bay Sands Theater of the award-winning movie “Ilo Ilo,” a film inspired by her eight-year employment and relationship with a Singaporean family.

“Ilo Ilo,” which won the Camera d’Or (best first feature film award) in the prestigious Cannes Film Festival in May, was written and directed by Anthony Chen, 29, the eldest of three boys Sajonia took care of from 1988 to 1997.

“I’m very happy that they remembered the years we were together and that this was made into a movie,” Sajonia, 55, a native of San Miguel town in Iloilo province after which the movie was titled.

The audience gave “Ilo Ilo” a standing ovation, captured on a video posted on its official page on Facebook.

After its screening in Singapore, the film is expected to be shown in the Philippines. It stars Filipino actor Angeli Bayani, who plays the role of Sajonia.

The youngest of six children and a midwifery graduate who failed to pass the board examination, Sajonia went to Singapore in 1986 because she could not find a job in Iloilo.

She first worked as a domestic helper. After her contract expired, she went to work for the Chen family in 1988. She sent part of her earnings to her own family in Iloilo.

Aside from doing household chores, Sajonia took care of her employers’ three children—Anthony, Justin and Christopher. She was closest to the youngest, Christopher, who was only a month old when she started to work for the family.

The children learned their first English words from “Auntie Terry,” as they called Sajonia. She also made them listen to her cassette collections of “Miss Saigon” and “Les Miserables.”

At the height of the Asian financial crisis in 1997, Sajonia returned home after her fourth two-year contract with the Chens had expired.

She also thought she was ill, only to learn later that she was experiencing menopausal symptoms.

For 13 years now, she has been living with Taguibe, 65, in their house in Sitio Onas in Barangay Santa Cruz, 5 kilometers from the town proper.

The Chens and Sajonia lost contact for 16 years. She wrote to the family once but she did not know that her letter never reached them because they had moved to a new place. But she  kept pictures of her former wards.

“Ilo Ilo,” which has been screened in various international film festivals, led to the reunion of Sajonia and the three Singaporean children, now all grown up.

After his film had won the Cannes festival, he decided to find his former nanny. He traveled to the Philippines and in June he met public relations consultant Charles Lim, a Cebu-based Singaporean and chief executive officer of Selrahco Management and Consultancy Services, who offered to help him.

Lim requested media outlets in Iloilo to help trace Sajonia. But without her complete name and address, and only with photos taken when she was still in Singapore, the search took weeks.

“We do not have a television and our radio station is not working well,”  Sajonia said.

In July, a nephew of Sajonia in Australia recognized her picture in a Facebook post of radio station Bombo Radyo. He contacted a cousin in Iloilo who, in turn, informed Sajonia about the search for her.

“When I learned that someone from Singapore was looking for me, I was concerned that I might have done something wrong and that they would arrest me,” Sajonia said.

But on July 22, Anthony and Christopher Chen quietly arrived in Iloilo City and on the next day paid a surprise visit to their Auntie Terry at her home in San Miguel.

At first, she did not recognize Anthony. “Who are you?” she asked him. But she recognized the now 24-year-old Christopher whom she last saw when he was 8.

“I embraced them and cried a little,” she told the Inquirer.

The brothers took their former nanny and Taguibe to Iloilo City to shop and stay overnight in a hotel before they returned to Singapore on July 24.

Anthony said his family was overjoyed when they learned about the reunion.

“My family and I are completely overwhelmed by the goodwill coming from Iloilo and the Philippines in finding Auntie Terry. We honestly did not expect to hear any news so soon,” he said in a statement.

“‘Ilo Ilo’ is a story about love, family and relationships, and we could never have imagined that a little film like this could reach out to connect and reconnect with those ties that we thought were long lost,” the filmmaker said.

Sajonia said she had always considered her former wards her children, having none of her own. “I’m happy that they grew up well,” she said. 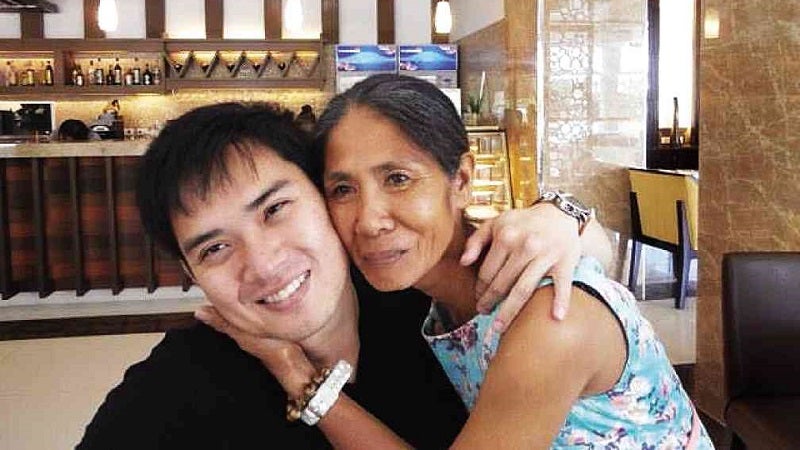 HAPPY ENDING FOR OFW Former nanny Teresita Sajonia hugs Christopher Chen, the youngest of her three former wards in Singapore, at a hotel in Iloilo City. Sajonia is the subject of a Cannes’ award-winning film written/directed by Christopher’s eldest brother, Anthony. PHOTO COURTESY OF SELRAHCO