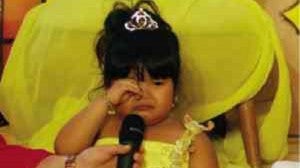 RYZZA Mae Dizon in a weepy moment during her recent birthday party. Photo by ARNOLD ALMACEN

Child star Ryzza Mae Dizon made this appeal to a contest winner, who called her “landing bata (flirty kid)” in “The Ryzza Mae Show’s” August 14 episode.

Chairman Eugenio “Toto” Villareal of the Movie and Television Review and Classification Board (MTRCB) said these two scenes “palpably violate the dignity of the child.”

“We’re a bit lucky because Ryzza Mae has a high IQ, and she was able to express how she felt about the shabby treatment,” the MTRCB chief told the Philippine Daily Inquirer. “Other kids are not as expressive.”

He said the fact that the child star was “exposed to malicious and rude statements … imparted the notion that it was natural to utter slanderous and abusive statements against someone.”

In the second instance, Villareal found Sotto’s action “disturbing”  because, he said, [Ryzza Mae] was “exploited as she was ridiculed, humiliated and degraded by the act of the host.”

Villareal continued: “We want to emphasize that children between 1 and 8 years old are not yet capable of critical judgment. They are impressionable and still incapable of processing a joke as such. We’re aware that it was a joke, but kids watching the show may not be [as aware]. They may think it’s okay to spit in another person’s face, or for someone to spit in theirs.

The MTRCB head stressed, “Children “should not be treated like toys or pets.”

Coming to Ryzza Mae’s defense, the MTRCB summoned Tape Inc. (producer of the two programs) to a “mandatory conference [on Thursday for airing] scenes allegedly insensitive and unfriendly to children.”

During the meeting, Villareal said GMA 7 and Tape Inc. “acknowledged lapses” and promised to submit tomorrow “concrete and time-bound remedial measures … with adequate review and feedback mechanisms” to prevent their recurrence.

The network and the programs’ producer further agreed to “enter into a three-month period of closer collaboration” with MTRCB to ensure the airing of child-friendly scenes on GMA 7.

“In fairness to those who attended the conference, they were all very receptive,” Villareal told Inquirer. “A good part of the meeting was spent consulting our resource person, a child psychologist, on the best ways to protect the interest of the child.”

Dr. Vanessa Cainghug of the Philippine Psychiatric Association “gave inputs as to how to ensure the psychological well-being of the child host,” Villareal reported. “We discussed with its producers the best ways that the program could tell jokes without affecting young actors psychologically.”

“Of great concern is determining who will deal with Ryzza Mae in her scenes and how, such that her dignity and well-being as a child are not violated [pursuant to the Children’s Television Act of 1997],” Villareal said.

He added that he was very pleased with the result of the conference.

“The producers promised me that they were taking the matter seriously. The MTRCB intends to brief them, as well as producers of other shows with similar format, on the Children’s Television Act (or Republic Act No. 8370).”

Ryzza Mae became popular when she won the Little Miss Philippines title in 2012. Aside from “Eat Bulaga” and “The Ryzza Mae Show,” Dizon is also seen in the new sitcom “Vampire ang Daddy Ko.” She was in the cast of the 2012 fantasy-adventure film “Si Agimat, Si Enteng at Si Ako.”