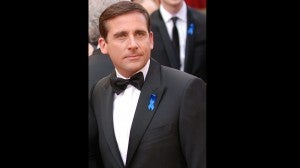 Is comedian Steve Carell transitioning into a dramatic actor? It sure looks that way in his latest starrer, “Crazy, Stupid, Love,” where he plays a long-married man who thinks he’s living the good life – until his wife (Julianne Moore) reveals her affair with a co-worker!

Carell’s character tries to pick up the pieces of his life, or what’s left of it, and even resumes dating. He’s a complete failure at it, until he meets an experienced female slayer (Ryan Gosling), who teaches him how to buff up his dowdy looks and smoothly deliver pick-up lines guaranteed to make women “surrender.”

It all works swimmingly well for Carell – until he realizes he still isn’t happy, a feeling that, interestingly enough, his ex-wife shares. So, it’s only a matter of time before they give love a second chance.

— So far, so predictable. But, to its credit, the film doesn’t stop after narrating its lead couple’s story, but goes on to tell the adjunct romantic tales of Carell’s 13-year-old son, who loves the family’s 17-year-old babysitter, who in turn carries a secret torch for Carell, who’s her father’s best buddy –!

To complete the La Ronde scenario, Carell’s eldest daughter (Emma Stone) is made to fall for his lothario-mentor.  – We’d better stop with the “spoilers” here, or else the entire film will end up as a foregone conclusion.

By expanding its storytelling to include all of these other victims of Cupid’s whimsical love-arrows, the movie shows that Love is indeed Stupid and Crazy –but, you know what? At the final fade, it all makes sense (knock on wood).

In fact, the most interesting performances in Carell’s starrer are turned in by the actors who play his teenage son and his beloved babysitter. It’s refreshing to see young and idiosynchratic actors like them performing circles around their much older costars, incuding the habitually superlative Julianne Moore. In this movie, at least, they make a bigger and deeper impression than she does!

As for Carell’s “transition” to drama, we must sadly report that it doesn’t set the movie screen on fire. He shouldn’t – mustn’t – quit his day job, because he doesn’t have the exquisite mix of humor and bittersweet angst needed to make his character truly and memorably tragi-comic.