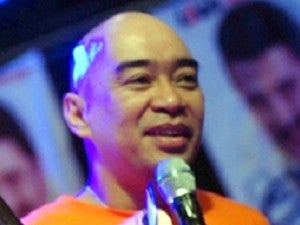 The 6:14-minute video clip shows a couple, who look like Wally and  EB Babe Yosh, enganged in a steamy sex.

He has five children.

The couple on the sex video, towards the end of the clip, looked at the camera and smiled. The guy then gave the girl a peck on the lips.

Wally and EB Babe Yosh could not be reached for comment as of this posting.

The Television And Production Exponents, producer of Eat Bulaga, told Inquirer Entertainment it was not releasing a statement on the issue.

The scandal broke a month after a sex video allegedly involving Parokya ni Edgar lead vocalist Chito Miranda and his girlfriend actress Neri Naig hit the web. Miranda later took to Instagram to say sorry for a “leaked private video of me and my girlfriend.” With a report from Bayani  San Diego, Inquirer Entertainment