Gerald Anderson in a different league of acting

Looking back on his experience working on his latest movie, the crime thriller “On the Job,” Gerald Anderson couldn’t help feeling “blessed and lucky” that he was given a “rare opportunity” to be in the company of Piolo Pascual and Joel Torre—two actors in show biz whom he emulates.

In the movie directed by Erik Matti, Gerald plays Daniel, prisoner-turned-hitman under the tutelage of fellow inmate Mario (Joel). Acting alongside the veteran, Gerald pointed out, was at once enjoyable and enriching for himself as a maturing actor.

“I learned and absorbed a lot from Tito Joel. He was my mentor for the film, and now, also for life,” Gerald told the Inquirer. “I picked up a lot of things simply by observing him.”

On the other hand, Piolo—who plays Francis, an NBI agent tasked to hunt down Daniel—has always been one of Gerald’s idols since joining show biz in 2006 via “Pinoy Big Brother: Teen Edition.”

“Working with [Piolo] was a dream come true,” Gerald said. “He was like an elder brother. Not everything’s rosy in show biz; you go through a lot. It’s good to have someone you can talk to.”

The 24-year-old has so far starred mostly in romantic-comedies or dramas, and has been raring to do something different—

specifically, an action movie. Though initially shocked upon learning that he would portray a rough-acting, potty-mouthed contract killer, Gerald said it motivated him even more to accept the role. 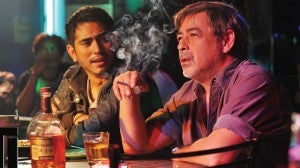 GERALD Anderson and Joel Torre in “On the Job”

The Kapamilya star shared with scribes at a recent press con that he did his own research to prepare for the movie, and also presented his own ideas to Matti. “I watched a lot of movies about hitmen, and tried to learn more about life in prison,” he related. “On the first day of shooting, I told Direk I wanted to shave my eyebrows and do something radically different with my hair… I imagined how Daniel should look.”

One of Gerald’s most memorable experiences working on “OTJ”—declared Jury’s Choice at the recent Puchon International Fantastic Film Festival in Korea—was doing a love scene with newbie Dawn Jimenez, which reportedly took eight hours to finish. “We did a lot of different shots… I thought it was kind of awkward for Dawn because it was just her second day on the set. I tried to make her feel comfortable,” Gerald said, adding that the scene turned out beautifully.

Meanwhile, “surreal” was how Gerald described the feeling of attending this year’s Cannes Film Festival, where “On the Job” premiered in the Directors’ Fortnight and ended in a two-minute standing ovation. He recounted standing under the spotlights inside the dark Theater Croisette after the screening.

“Seeing so many people appreciating the film, the acting, the craft… It was so overwhelming, but at the same time humbling as an actor,” he said.

Gerald never imagined that acting would take him to places—literally and figuratively. He said he left Cannes a more educated and inspired actor, and that newfound drive he would take wherever he goes and whatever he does.

Produced by Reality Entertainment and Star Cinema, the movie opens in cinemas today.