Contrary viewing experiences at the cineplex 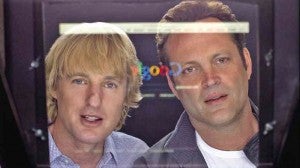 In “The Internship,” Vince Vaughn and Owen Wilson play jobless salesmen who become Google interns, despite the fact that they’re way older than the young geniuses whom the top IT outfit usually hires. Expectedly, they’re treated dismissively and scorned for the irrelevant dinosaurs that they are—but, it turns out that they have the experience and street smarts to eventually make their team win the hotly contested competition!

The film’s stars and some supporting players give their roles everything they’ve got, but the flick’s episodic plotting slows it down much too soon, as viewers are taken from one challenge and consequent humiliation to the next.

The movie does make a valid point about the importance and relevance of age and wisdom in a world that adulates youth for its own sake, but the theme and “message” come across too predictably to be really convincing, moving—and entertaining.

For his part, Hugh Jackman infuses “Wolverine” with his amazingly buffed-up bod and his determination to make his role and the movie’s tale more than just cartoon action frolic and caricature.

The fact that much of the film is set in the east adds another exotic fillip to the proceedings, and makes “logical” the use of a lot of oriental martial arts to beef up the action.

Trouble is, the cartoon, action and exotic aspects of the production have a hard time coming copacetically and cinematically together, and the movie ends up as as amalgamation of disparate impulses that don’t quite mesh.

It’s also rather disconcerting to see the film’s central, all-powerful fighting robot-machine being made to engage in duels or battles with puny human opponents!

This is action-fantasy taken to an incredible level, so viewers can perhaps be forgiven if they aren’t eager to suspend their disbelief all that much—and go along for the far-out ride.

Finally, “Smurfs 2” has our blue-skinned munchkins and their human friends traveling all the way to Paris, France, to rescue poor, little Smurfette, who’s been kidnapped by the movie’s villain so that he can use her unique essence to energize his scheme for—that’s right, global domination (so, what else is old?).

In fairness to this sequel, however, what makes its engine hum isn’t that old cliché, but the theme of friendship enabling “weak” folks and their Smurf BFFs beat any and all oppressors who want to use, abuse and otherwise exploit them for their own dark, nefarious ends.

Of course, this is a fantasy animated feature, but if you move to its groove, it could really make you care (well, at least for the movie’s running time) about how friends can successfully help each other in dire times of need—and snatch victory out of supposedly certain defeat!