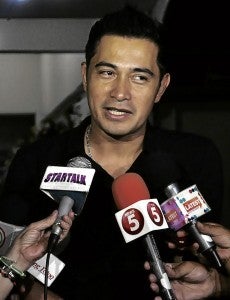 MANILA, Philippines—Actor Cesar Montano on Wednesday branded as “preposterous” the accusation of his estranged wife Sunshine Cruz that he went to her house and raped her on Mother’s Day.

In a statement, Montano’s legal counsel Joel Ferrer said his client “vehemently denied the charges and prevarications leveled against him as contained in the complaint of Cruz… There was no truth whatsoever that my client abused Cruz whether physical or verbal.”

Ferrer added: “The marital rape that Cruz [alluded to was] simply preposterous.” The lawyer claimed Cruz invited Montano to join her and three daughters for dinner on May 12, Mother’s Day. “They had dinner at the Edsa Shangri-La Hotel. Thereafter, Montano slept and stayed overnight at [Cruz’ current residence] and left the place the following day. The two even had exchanges of text messages of good nature, belying any animosity between them several days after the Mother’s Day celebration.”

Ferrer also clarified the issue on the custody of their children. “It is actually the children’s preference that they stay at their family residence at Tivoli Royale,” he pointed out. “It is also worth mentioning that Cruz is at liberty to see them anytime whether at the Tivoli residence or in the school where the children go to every day.” He said it was Cruz who decided not to visit the girls, “probably due to her hectic work schedule.”

The lawyer also said the complaint for violation of RA 9262 that Cruz filed on Tuesday was a “mere rehash of [her] petition for protection order [that she] filed earlier.” He stressed that “the application for a temporary protection order (TPO) was denied by the court last week [although] a hearing for the protection order is set on Aug. 15.”