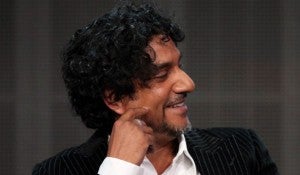 Actor Naveen Andrews speaks onstage during the “Once Upon a Time in Wonderland” panel discussion at the Disney/ABC Television Group portion of the Television Critics Association Summer Press Tour at the Beverly Hilton Hotel on August 4, 2013 in Beverly Hills, California. AFP

BEVERLY HILLS, California – Naveen Andrews said he welcomed the transition from a movie about Princess Diana to a TV series inspired by “Alice in Wonderland.”

Andrews said that after “Diana,” the “Wonderland” TV series offered a chance to do something completely different that, as he put it, isn’t “bound in space and time.” He spoke Sunday to the Television Critics Association.

“Once Upon a Time in Wonderland” stars Sophie Lowe as a young woman who escapes Victorian England down the fabled rabbit hole in search of adventure and love. It debuts Oct. 10.

TAGS: Diana, Naveen Andrews, Once Upon a Time in Wonderland, shows, Television