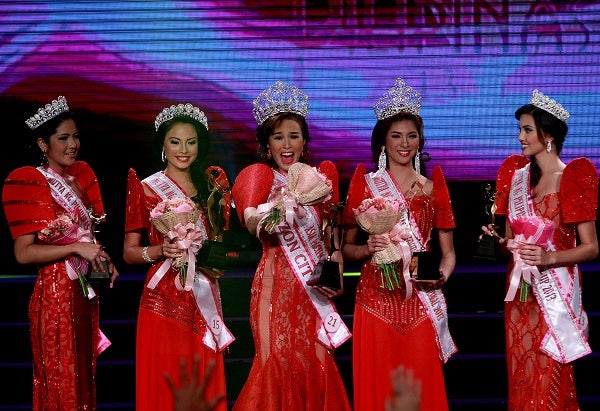 MANILA, Philippines – For newly crowned Mutya ng Pilipinas-Asia Pacific International Koreen Medina, the recent passing of her great grandmother served as inspiration for her to push harder and make her family proud in her quest for a national beauty title.

The 18-year-old mass communication student from Quezon City bested 30 other aspirants in the 45th anniversary edition of the Mutya ng Pilipinas pageant  Friday night at the NBC Tent in Taguig City and bagged the coveted crown, which comes with a prize package worth P1 million.

Medina shared top honors with a fellow homegrown beauty for this year’s pageant. Cebu City’s Angeli Dione Gomez received the Mutya ng Pilipinas-Tourism, which resulted in back-to-back victories for local bets in the national search. She won the same prize package as Medina.

As they did last year, homegrown candidates edged out overseas Filipinos of mixed parentage for the top Mutya titles this year.  Maureen Ann Montagne from the Filipino community of Arizona had to settle for the first-runner-up spot. Second-runner-up honors went to Kristian Aubrey Nolasco from Caloocan City.

Asdis Liza Karlsdottir from the Filipino community of Iceland received the Mutya ng Pilipinas-Overseas Communities award. She was also proclaimed “People’s Choice” for getting the biggest number of votes on Facebook with over 19,000 “likes.”

Over the years, the Mutya ng Pilipinas pageant has pitted aspirants from different parts of the country against representatives from overseas Filipino communities. Local bets and overseas-based beauties have shared top honors in the past.

Medina told the Philippine Daily Inquirer after her coronation that her great grandmother, Cecilia Cartagena, passed away while she was in Palawan for official pageant activities. “I dedicate this crown to her,” she said.

During the final round of questions, Medina spoke of her experiences not growing up with her parents and being raised by her grandparents. “They are very supportive of me, and I love them very much,” she later told the Inquirer.

For the question-and-answer portion of the competition, Medina said a Filipino woman is defined by her character more than her beauty or intelligence because “it shows how you are raised by the people around you.”

Even as a teenager, Medina already had a wealth of experiences that helped her in the competition. She has been joining singing competitions from the age of 6  and confessed that “there were times I didn’t win.” The aspiring young singer became a contract artist of ABS-CBN’s Star Magic management arm after winning in “My Girl,” a pageant-like competition in the now-defunct noontime variety program “Happy, Yipee Yehey!”

But for Medina, the Mutya ng Pilipinas pageant was her biggest challenge so far. She almost gave up hope, even when people started noticing her.

“I thought I will no longer advance to the top 10 because I already have many special awards,” she said.

But when she did place in the semifinals and was waiting for the finals results, she said there was a glimmer of hope in her heart. “I was telling myself, ‘sana sa akin na ito.’ God has planned everything out,” she said.

Medina said she would use her title “to inspire other people. There are times when people lose hope, so I want to serve as an inspiration to many people through my title.”

And as ambassador of “beauty tourism,” the main thrust of the pageant, Medina hopes to promote the Puerto Princesa Underground River, as well as Puerto Princesa City itself. “The place is very beautiful, I enjoyed our trip there,” she said.

She also plans to help boost tourism in the other provinces she toured with her fellow candidates—Pampanga and Laguna.

Medina received her title from last year’s winner Camille Guevarra from Pampanga. She will represent the Philippines in the Miss Intercontinental pageant in Egypt later this year.

Gomez got her crown from fellow Cebuana Rizzini Alexis Gomez, who is also the reigning Miss Tourism International. The new queen will try to duplicate her predecessor’s international victory in Malaysia before the year ends.

Mutya Press Favorite and Mutya Photogenic Zandra Flores from Pangasinan advanced to the semifinals. But Best in Long Gown and Best in National Costume Marichat Evaristo from Bacolor failed to make it to the top 10. Ivy Camille Villanueva from Central Luzon was voted by her fellow candidates Mutya Friendship.

The pageant paid tribute to the local fashion industry. Tasked to create 1960s-inspired outfits for the candidates, the designers engaged in a competition of creativity, which is a tradition in the nationwide search.

Bong Cruz and Joebee Henson were proclaimed Best Designers for the dress they made for Evaristo.

The Inquirer is one of the pageant’s media partners.