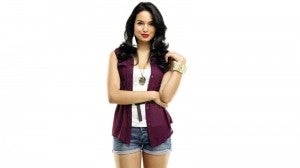 MANILA, Philippines—The GMA Network Inc. has asked a Quezon City court to issue another summons to its talent Sarah Lahbati, who recently flew back to the country from Switzerland to file charges of perjury and grave coercion against a network official, to face the P8.5 million breach-of-contract lawsuit filed against her.

The network, through lawyer Christine Bio, requested Quezon City Regional Trial Court Judge Germano Francisco Legaspi of Branch 77 to issue an alias summons to Lahbati and order her to answer the civil case against her for specific performance with damages filed on January 11.

In the July 18 motion for the issuance of an alias summons, GMA 7 cited a return of summons issued by the court where the process server said that attempts were made on January 16 and 17 to serve the summons and a copy of a complaint and its annexes to Lahbati at her condominium unit.

But the summons was unserved because there was nobody at the actress’ home. GMA 7 said that according to news reports, Lahbati left the country for Switzerland on January 13 and “thus avoided service of summons.”

The network said that during the first week of July, Lahbati returned to the country to file on July 15 in the Quezon City prosecutor’s office a complaint of grave coercion against Anna Theresa Gozon-Abrogar, the GMA Network Inc programming consultant to the chairman and chief executive officer as well as GMA Films Inc president.

It noted that Lahbati’s complaint indicated the same address where the previous summons was served.

“Based on the foregoing… GMA 7 respectfully moves for the issuance of an alias summons on defendant Lahbati at her aforesaid address,” the network said.

In its suit for specific performance with damages, GMA 7 said that Lahbati signed a contract in September 2012 to appear in its program “Indio.” But during a location shooting on November 9, 2012, for the show at Morong Park, Subic, in Olongapo City, “Sarah Lahbati walked out from the taping of her scenes and departed from the location shoot.”

The network pointed out, “Because of Sarah Lahbati’s refusal to perform her scenes, the remaining close-up scenes, which were very vital to the mounting of the whole scene for which GMA 7 had clustered four weeks of scripts for the Subic shoot were not finished … In order to resume and finish the aforesaid big scene, GMA 7 had to spend P576,000 more or less.”

Likewise, on Dec. 11, 2012, Lahbati went on a one-month leave of absence, which was not approved by the network. GMA 7 demanded for Lahbati to return to work and comply with her commitments but the actress allegedly disregarded her undertakings and allegedly breached her contract with the network.

GMA 7 asked the court to order Lahbati to comply with her commitments under the management contract and to pay the network liquidated damages of P7 million, attorney’s fees of P1 million and P500,000 litigation expenses.