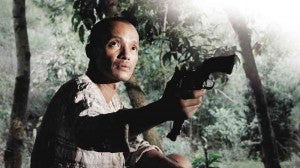 ART ACUÑA had to get accustomed to using a gun and a bolo in “David F.”

“If you think you’re strong enough [to tackle your dream role], go for it.” This is award-winning actor Art Acuña’s advice to aspiring actors.

“The first thing to do is to determine if you love [the role] enough to suffer through it,” he told them through Inquirer. “Also keep in mind that there’s going to be a lot of disappointments along the way. You may not always get the part you want.”

He continued: “You may not even get an audition, but if you know how to turn that around, to become better in the next audition and to actually be the best you can be for that part at that moment in time, then go for it.”

For Acuña, a person should love his job “like you can’t imagine yourself doing anything but that.” He elaborated, “Just give me a chance to be in front of the camera or on stage and I am, at that moment, the happiest person in the world. Nobody is going to take that away from me.”

Acuña appears in two entries in the New Breed category of the 9th Cinemalaya Philippine Independent Film Festival, which starts on July 26. He is in the thriller “The Diplomat Hotel” and the period drama “David F.”

Megged by Christopher Ad Castillo, “The Diplomat Hotel” is about a disgraced reporter (Gretchen Barretto) seeking redemption by leading her documentary crew in doing a feature at the old, haunted Diplomat Hotel in Baguio City.

“It was a long ride going there. It was cold,” Acuña recalled. “We had a reading the first night and then started shooting very early the next day, in colder temperature, of course.”

Acuña said he loved working with the cast, especially Barretto, whom he described as “a terrific actress. Our batuhan of lines was always very organic.”

He was also very impressed with Mon Confiado, who voluntarily shed 40 pounds for the project, Acuña said. “That guy is a real method actor.”

Acuña tried to change his look by sporting long hair. He explained: “Direk Chris and I sort of went that way because, when you watch cameramen, especially adventure cameramen who go to the provinces or out of the country, you’ll notice a somewhat general look—unkempt long hair. They just tie their hair back because they don’t have time to cut it. Also, they wear rugged clothes all the time. This helped me become a different person, too. It was a good thing.”

For “David F,” Acuña had to wear period costumes. “My scenes are set in 1901. I also had to get accustomed to using a gun and a bolo. I practiced with them so they became second nature to me,” he said. “When you’re playing a character with a knife, for example, sleep with that knife and wake up with it so you don’t think about it too much and act naturally with it.”

The Emmanuel Quindo Palo film features three short stories hinged on the story of David Fagan, a real-life historical character in the early 1900s. A black American member of the United States regiment sent here during the Philippine-American war, Fagan became famous when he deserted US troops to join Filipino revolutionaries. He was declared a public enemy of the US government when he led a series of battles  against American soldiers. He was promoted to colonel of the Filipino troops under Emilio Aguinaldo, and married a Filipino woman.

Acuña won numerous best supporting actor awards for “Niño” (Loy Arcenas, 2011) and “Posas” (Lawrence Fajardo, 2012), both Cinemalaya entries. He admitted to being aware that much is expected of him for his entries this year.

“Nothing is going to match the pressure I put on myself,” he said. “I like the work and the pain it causes me sometimes—like if I don’t get something and continuously try to find ways to get it. For me, it’s about the work, not about winning the prize.”

Read Next
Cinemalaya at a crossroads
EDITORS' PICK
What to watch out for when selecting a video surveillance solution
House energy committee chair Arroyo bats for cheap electricity
DOH says COVID-19 cases plateauing, but public shouldn’t be ‘complacent’
23,000 cops to be deployed nationwide for school reopening
Look Through: The fate of impounded stray dogs
Unleash the photographer in you this World Photography Day with vivo smartphones
MOST READ
Sharon Cuneta asks for prayers for friend in ICU who suffered silent stroke
Light therapy could be the answer to your sleep problems
Korina Sanchez reunites with former ABS-CBN co-anchors Julius Babao, Cheryl Cosim
PBA: San Miguel ousts Meralco to arrange finals duel vs TNT
Don't miss out on the latest news and information.