RYAN Reynolds says he would love to do another movie with Sandra. Photo by Ruben Nepales

LOS ANGELES—“Some people are perfectly comfortable being promiscuous and running around,” Ryan Reynolds said in a recent interview when asked about his stance on commitment and marriage. After he and Scarlett Johansson divorced in 2011, Ryan plunged into another marriage, with Blake Lively, in 2012.

“Some people are comfortable having a one-year relationship and then going into another one-year relationship, then another,” the actor added. “I don’t judge [them]. To each his own; different strokes for different folks. I’ve done what’s right for me. I don’t know if that’s from upbringing, nature or nurturing.”

Ryan’s parents, Jim and Tammy Reynolds, have an enduring marriage but, he said, “I don’t necessarily use my parents as an example. I have friends who have very successful, long-running relationships and I see value in that. Jeff Bridges is a good example. He’s had one relationship for 30 plus years. He and Sue (full name: Susan) have a wonderful life together. That’s something I look up to and aspire for.” He became friends with Jeff after film ing their action-comedy, “R.I.P.D.”

He’d jump at the chance to work again with another friend, Sandra Bullock, if the right script came along. “I would love to do another movie with Sandra,” he said of his costar in the hit “The Proposal.” “We’ve talked about it. We had such great chemistry [in that film]— that was based on 10 years of friendship. We had known each other for a long time when we went into that. If it’s the right [project], we’ll do it because it’s like working with family. It’s a great experience.”

Back to Jeff: Ryan couldn’t stop gushing about him. The two play ghost cops from the Rest In Peace Department in the supernatural tale directed by Robert Schwentke. He referred to Jeff’s nickname in the latter’s most famous role, a bowler, in “The Big Lebowski.” “He’s The Dude, not The Guy,” Ryan enthused. “‘R.I.P.D.’ was a really interesting idea. I read the script and it was something that kept coming around. Movies like that are fairly expensive. They’re contingent on the cast. So Jeff signing on locked it all in place.”

Ryan’s enthusiasm for Jeff is understandable—the latter is one of the friendliest, most gregarious actors in Hollywood. “Five months with him was such a treat, and not just for me,” Ryan said. “It was for everybody, even for the caterer.”

He added: “Everybody feels like they’re part of something special when they’re around Jeff. He’s been doing this for a long time at an extremely high level and standard.”

He went on, “You can look back at any one of his movies—‘Fat City,’ for example. He was just as good then as he is now. It was a pretty great experience to spend that time with him. I didn’t have someone in my career who was a mentor. Most of them were dead by the time I was looking up to them. But Jeff was an amazing guy to work with. I would definitely say he’s a mentor to me, in both my career and my life. He’s an incredible guy.”

Ryan cracked: “Jeff and I had more inside jokes than I could remember. We were laughing most of the time. If I didn’t have him, there would have been a messy stabbing death.”

While Ryan did stunt work in “R.I.P.D.,” he admitted that he was not as gung-ho as before. “It’s tough; I don’t know how Jeff does it. He does a lot of stunts. I’m 36 and I tell you, falling on cement isn’t as hilarious as it used to be. I’m beat up. I’m in physical therapy four or five days a week. That’s from movie after movie 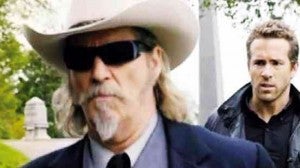 JEFF Bridges (left) with Reynolds in “R.I.P.D.” Reynolds looks up to his older costar: “He’s incredible.”

where I kept saying, ‘No, I’ll jump through the window.’ ‘Yeah, I’ll jump off the roof—it’s fine.’ ‘No, you can really shoot me.’ After a while, your body starts to catch up. It’s tough now. The harnesses and stuff help but you still get pretty beat up.”

Ryan has another movie where his racer character dreams of winning the Indy 500. Fortunately for Ryan, no stunt work is involved because the movie is an animated feature by DreamWorks. He voices the title character in “Turbo,” a lovable garden snail who gets the gift of speed. He also voiced a character in DreamWorks’ “The Croods.”

The studio’s animation artists like Ryan’s voice as is. He related, “At DreamWorks, if you go in and meet with them and say, ‘I have this great Scottish accent I want to do for this character,’ they’ll say, ‘No, no, no. We want you. We already cast you based on interviews you’ve done.’ When I got ‘The Croods,’ it was because they had animated an interview that I had done.”

Asked about his most memorable voice performances in animated films, Ryan replied, “I loved Bob Newhart in ‘The Rescuers.’ That stuck with me as a kid. I didn’t even know who Bob Newhart was at the time. And when I heard Mike Myers do ‘Shrek,’ he just nailed that.”

According to the actor, he is not a racer in real life. “I drive like a little old lady,” he quipped. “I’m not much of a race car driver. But motorcycles are a different story. I’m a big motorcycle enthusiast. I do race them—flat track, dirt bikes, sport bikes. I love all that stuff. I love motorcycles. I have old bikes—a Triumph Bonneville, Vincent—that one I love. I have an old Ducati. Nothing new, I like working on them and fixing them.”

When this motorcycle buff was asked to complete the sentence, “My wardrobe is not complete without …” Ryan at first jested, “Adult diapers? The briefest of briefs?”

Does Blake help him with his wardrobe? He said “anybody in any relationship” would of course help in that department. He explained, “You walk over and they’re your personal mirror.”

To escape from the daily grind, Ryan quipped, he goes for “fairly healthy ways.” Ever the playful dude, he added, “It’s not LSD anymore.” Then he remarked, “I hate to sound like a broken record but a motorcycle ride … that will do it for  me. If I’m stressed out, I go for a little ride. Just four miles or so and I’m good.”