Susan Roces has not sealed her heart

Veteran actress says, if jokingly, that there just may be room left for a new love
By: Allan Policarpio - Reporter
Philippine Daily Inquirer / 09:49 PM July 14, 2013 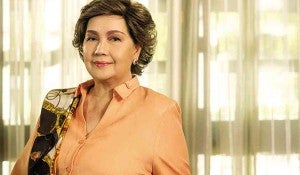 Susan Roces believes the best way to live life is to continue doing what one loves the most. And for this veteran actor, that has always been acting in front of the camera.

That is why, at the age of 71, Roces feels blessed that she still gets plenty of new projects. She welcomes being occupied, especially since her daughter, Mary Grace Poe-Llamanzares, has a lot of things to do as a first-time senator.

“There have been some changes in my life since Grace was elected. She’s very busy these days but she would tell me, ‘So are you!’ We’re both happy that we have our own separate careers,” she said at a recent press conference for ABS-CBN’s coming drama series “Muling Buksan ang Puso.”

Roces looked every bit a movie queen in a brightly colored dress. She was all smiles as she fielded questions from the media. It seemed like she didn’t age, a veteran scribe remarked.

“Well, being busy is a good reason to stay fit, to sleep early [for] the next day’s work. Being busy keeps us young,” Roces said.

Although she has worked in the industry for decades, acting still excites Roces as much as it did when she started doing films under Nepomuceno Productions and Sampaguita Pictures in the 1950s.

How does she keep the fire burning?

Roces said she liked to look at her career in stages, and that she enjoyed the progression of the roles and characters she got to play as she grew older.

When she was a teenager, Roces said, her goal was simply to entertain through lighthearted musicals and comedies.

“I used to get embarrassed when other actors and I were introduced onstage and our [respective] filmographies were read. While others have dramatic movies on their lists, I’d have the likes of ‘Boksingera’ and other comedies,” Roces said, laughing. “But those were fun to do!”

She continued, “But as time passed, I tackled dramatic and more mature roles in such projects as ‘Gumising Ka … Maruja’ and ‘Maligno.’ I got to work with fine filmmakers like Celso Ad. Castillo and Lino Brocka.”

Because she’s one of the industry’s most respected actors, Roces said that the profession had gone beyond mere acting for her, and was now also about inspiring and supporting young hopefuls.

Seeing her young costars in “Muling Buksan,” such as Enchong Dee, Enrique Gil and Julia Montes, reminded her of her teenage years in Sampaguita, Roces said.

“Now we help young hopefuls the way our seniors helped us when we were starting our careers way back. Now I serve as a mentor, a guide. We help groom young actors for bigger roles,” she said.

Dee said he was excited to be working with Roces for the first time and was looking forward to learning from her experiences. “I get fascinated when she tells me about the difference between actors during her time and actors today. She tells me about all the things they did before, that actors don’t get to do these days,” he said.

Gil, on the other hand, was impressed by how attentive Roces was on the set. “She’s so observant. In our first scene together, Ms Susan pointed out that my shirt was a little wrinkled and my hair was a bit messy. She notices the smallest of details, things you forget,” he said.

“Muling Buksan” is supposed to be a reunion project for Roces and former screen rival Amalia Fuentes. Much to the fans’ dismay, Fuentes backed out due to “creative differences with the production team and the challenges and demands of a regular taping schedule.”

While saddened by Fuentes’ resignation, Roces noted that the replacement, Pilar Pilapil, has been wonderful to work with so far. “Pilar and I have done only a couple of scenes so far, but I really felt them. I’m looking forward to doing more scenes with her,” Roces said.

Meanwhile, teased if she was open to the possibility of finding a new love, the widow of Action King Fernando Poe Jr. said, “I don’t know. Mahirap magsalita nang patapos,” Roces said, laughing. “Kung sa bagay, ’di ko naman sinara ang puso ko—may konting puwang! (It is hard to say never. Besides, I did not close my heart; I left it ajar.)”

Lockdowns in PH: A brief history

Trillanes to opposition: Don’t sacrifice principles at ‘altar of winnability’