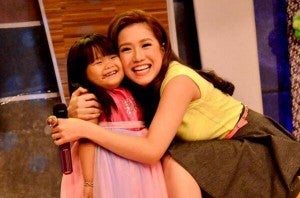 What amazing voice and singing prowess! Rachelle Ann Go exhibited these when she guested on the Ryzza Mae Show last Thursday. Often, little Ryzza would stare at her totally awestruck as Rachelle Ann sang snippets from her favorite songs of singers whose pictures Ryzza would fish from her handbag and flash at Rachelle Ann.

At one point, Ryzza had asked Rachelle Ann to open her mouth. Obligingly and amused, Rachelle Ann did so. Ryzza peered in and she asked Rachelle Ann: “Is there a radio inside there? Where is your voice coming from?” As they say, out of babes’ mouths come the truth. To the point, Ryzza–being a precocious and naturally curious child, and obviously astute beyond her years–had expressed what surely had been on every other viewer’s mind, too. Just where, indeed, is that  voice coming from? To think that what Rachelle Ann had done were merely impromptu and very brief performances. She had me spellbound, too!

It certainly didn’t hurt either that Rachelle Ann is pretty, vivacious, charming, and quick to laugh. And cutely dressed, too, on that show which caught Ryzza’s attention who could not resist telling Rachelle Ann: “I like your shoes.” The quick, easy, light, and happy exchange between Rachelle Ann and Ryzza was so pleasant to watch and certainly one of the very best episodes I have seen. I believe that rapport between them had much to do with Rachelle Ann’s own giving and solicitous attitude toward Ryzza. Unlike some guests on that show who came off as feeling competitive and even insecure–would you believe!?–with Ryzza.

You can’t be a dramatic actress. Just stick to being a comedienne.” Goodness, I say. Let Ryzza dream! She’s just a kid, in Christ’s name! But then, hasn’t her big dream, in fact, of becoming a child star already come true? Way beyond her wildest dreams, at that? I say to that guest: “Is this what you’re afraid of? Because Ryzza has now become a child wonder–against all odds–so much so that even as she merely verbalizes her dreams, sooner than soon, Ryzza’s dreams and wishes become Ryzza’a realities?

By contrast, and to get back to Rachelle Ann Go, she had given full encouragement and positive support to Ryzza when Ryzza said she may want to be a singer too but wondered if she could even be one because she felt she didn’t possess a nice singing voice. Rachelle Ann had quickly jumped in to erase Ryzza’s doubts by telling her: “Everything’s possible as long as you want it. Everything’s possible!” Bright-eyed, Ryzza had replied: “Really? You think I can also be a singer like you?” And Rachel Ann averred: “Yes, it’s possible. If you wish, I will even be your teacher!”

Hearing this, I had thought: “Wow! What a magnanimous spirit she has!” So lacking in some other accomplished singers in the industry who will not only not wish others well, much less share “tips” on their success, but even slam down roadblocks to others who also want to be stars.

True to her generous nature, Rachelle Ann Go had also given encouraging words to two young amateur singers on that show who had each given brief performances for her to critique. After giving them her assessment, she finished it off with further advice, including to Ryzza: “Kung anong gusto ninyong dream sa buhay, huwag kayong titigil hanggang hindi ninyo nakakamit yon.” (“Whatever dream you have in life, do not stop until you have attained it.”)