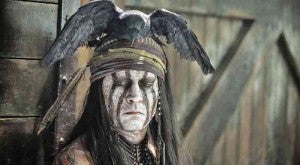 In general, producers in the world of entertainment don’t like taking risks. Experience has taught them that it’s more safely profitable to just ride on the popular trend of the moment.

Trouble is, trends are rather short-lived, so the trick is to guess when they’re still bankable before they lose their cachet and clout. Last season’s rave is often this year’s bummer, so producer who aren’t psychic are left holding a very cold and expensive carcass that nobody wants to watch.

So, some producers and stars bite the bullet and opt to err in the opposite direction—by intentionally taking risks and banking on unproven and thus “dangerous” concepts that they hope will surprise and delight viewers enough to end up as huge “sleeper” hits.

This season, one of the biggest risk-taking gambits is Johnny Depp’s decision to play Tonto in the new “Lone Ranger” movie, co-starring Armie Hammer as the iconic masked defender and avenger.

Depp plays the “sidekick” character in full “weirdo” make-up that makes him look like a member of a heavy-metal acid rock band—and it could potentially turn viewers off.

But, the idiosyncratic star is known for his far-out screen conceits that he manages to make to work in his favor, like his antic, rancid character in the “Pirates” film franchise, so there could be method to his latest “madness.”

In any case, Depp’s new screen gambit—and gamble—is so edgily attention-calling that costar Hammer will have to work really hard to avoid ending up as an also-ran, utterly upstaged by his loopy “sidekick”!

Other risky gambits this season include singing star Charice’s decision to go public about her being a previously closeted lesbian. Now that she’s “outed” herself, she feels free and true to her real essence, and show biz fans will just have to like it or lump it.

What some people find a bit sticky about this whole deal is how heavily Charice resorted to tri-media exposure to announce her decision. Be that as it may, the practical consideration is that, when you lay yourself and your career on the line in this controversial wise, you need all of the media exposure you can get to get people to understand where you’re coming from, so they can support your admittedly risky move.

The big question now is, will Charice’s big gambit work? Will her career not just survive it, but also flourish? Knock on wood!