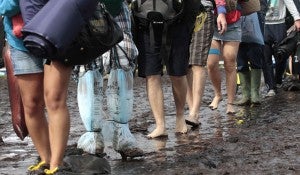 People wade through the mud as they leave the festival campsite near Hasselt, 50 miles (80 kilometers) east of Brussels, Friday Aug.19, 2011. Five people died in a fierce thunderstorm on Thursday, that mangled tents and downed trees and scaffolding at the open-air music festival PukkelPop in Belgium. Organizers canceled the annual four-day festival. AP

HASSELT, Belgium—The Britrock band Skunk Anansie had the crowd hopping and gyrating when a sudden, fierce storm began pelting the main stage — and the thousands watching them — with rain and hail.

Organizers said five people were killed and 140 injured, 10 of them seriously.

Skin, the band’s lead singer, described the chaos on the band’s Facebook page, saying “a burning hot sunny day turned into a mini-hurricane.”

“(A) tower fell onto our truck, we had to run for our lives mid-set as hail hit the stage and the wind began to tear it to pieces,” she wrote. “This was the scariest moment I have ever seen or felt in my 20 years of being an artist.”

Toon van Wemmel, 26, a graphic designer from nearby Leuven, said “the hailstones came down so hard they caused bruises.” He and his partner ran away from the main stage, turned around and saw trees crashing down where they had stood less than a minute earlier.

Officials said the dead were all Belgians, ranging in age from 15 to 59. They were not immediately identified.

Hilde Claes, the mayor of Hasselt, spoke of a “nightmare” and said the town had never seen a storm like the one Thursday.

“I have seen many tropical storms, but this was unprecedented,” said Chokri Mahassine, organizer of the annual festival that began in 1985.

The storm lasted barely 5 minutes. As the sky darkened, some of the 60,000-strong festival crowd ran for shelter from the rain and hail into the tents of caterers and festival sponsors.

But Claes said three huge tents buckled under the force of the wind and the weight of the hail, sending hundreds back outdoors. As tent poles buckled, canvas roofs shredded, flapping in tatters in the wind. Video showed panicked concertgoers crawling out from under the downed tents and running through fields of mud to safety.

“We were dancing away and it (the shelter) caved in in the middle and people were screaming and running away,” one sodden young woman told Associated Press Television News.

Dr. Pascal Vranckx of Jessa Hospital in Hasselt said many of the injured were hit on the head by flying or falling debris. The seriously wounded were taken to hospitals while others were treated at a local sports center.

“There are still three patients in critical condition, fighting for their lives,” Vranckx told reporters.

The storm sent thousands of mud-splattered youngsters, many shoeless, looking for train and bus transport home. Others stayed on the campground overnight, hoping the festival would resume Friday. Organizers deployed extra trains and buses to ferry the concertgoers home.

Claes and Mahassine said they received no advance warning of the storm that struck about 6 p.m. — a claim disputed by the Belgian weather office and VRT, the country’s Dutch-language public broadcaster.

VRT weather woman Sabine Hagedoren said alerts were issued for “intense rain and storm showers with a chance of hail and fierce wind gusts.” In an email to The Associated Press, she said an “orange” weather alert was issued — the second most serious.

“Unfortunately we cannot predict in which region — let alone in which town or city — the most serious thunderstorms will occur. But, definitely, an alert was issued for severe thunderstorms,” she wrote.

Belgian Prime Minister Yves Leterme offered condolences to the families of the victims and said authorities would continue to help the injured.

The festival featured internationally known acts, including Foo Fighters, Eminem and The Offspring.

“Our hearts go out to everyone affected by the tragic events at Pukkelpop,” tweeted the Foo Fighters, whose Thursday night show was canceled after the storm hit.

“This is not how it should be. Oof,” tweeted the Fleet Foxes, who had also been scheduled to play Thursday night. The band also used Twitter to assure family and fans that they were safe.

Damien Poinen, an 18-year old Belgian, was one of the many who camped overnight.

“On the one side (canceling the festival) was the right thing to do. On the other side, some still wanted to party,” he said. “Considering the people who died here yesterday, I was not going to stay anyway.”

This was the second deadly incident at an outdoor festival in a week. On Saturday, parts of a stage collapsed at the Indiana State Fair in Indianapolis, killing six people and injuring dozens, when winds of up to 70 mph (112 kph) hit.