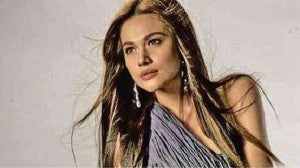 ALONZO. Pulls out all the emotional stops.

Thanks to director Cathy Garcia-Molina’s unique penchant for motivating her actors to come up with insightfully textured portrayals, her current film, “Four Sisters and a Wedding,” is a veritable feast of unexpectedly different and perceptively “differentiated” characterizations, some of them surprising to behold and savor because, in the past, the actors involved usually failed to measure up.

Take Toni Gonzaga: Most of her past TV-film work has been generally pat and predictable. In “Four Sisters,” however, Toni surprises us (and perhaps even herself) with her newly revealed capacity to do “deeper” and more truthful work, specifically in the penultimate scene in which, uncharacteristically bereft of makeup, her character finally confesses that her supposedly high-flying life in Europe has been a complete lie, and she has in fact been unsuccessfully trying to survive as a waitress and maid.

It took guts and exceptional honesty for her to go that deeply into her character’s heart of hurts, and we presume that the actress is grateful to her director for motivating her to go for (honest) broke.

An even more stellar standout is Bea Alonzo, who’s cast as the brainiest of the sisters, but is actually a bundle of insecurities. The lovely actress is able to eventually break through her character’s beautifully brittle façade and reveal how she really feels about her siblings, as well as the other issues in her life, like her boyfriend and his daughter, who dislikes her with a passion.

Another major thorn in Bea’s character’s side is the fact that she thinks her younger sister, played by Angel Locsin, stole another boyfriend away from her, and this has estranged them for years.

All of these issues boil over and explode in a key scene that enables Bea to pull out all the emotional stops. The potentially excessive scene is overlong and overdeclarative, but the actress is able to sustain it beautifully, so kudos to her.

For her part, Angel handles her character, the “rebel” and “loser” sibling, with the required edge and bite, providing raw contrast to Toni and Bea’s more tractable personas.

Coney Reyes, Carmi Martin and Boboy Garrovillo also have their brief but highlighted thespic moments, but the supporting performance we’re happiest about is Janus del Prado’s madcap but textured portrayal of Toni’s initially subservient boyfriend, whom she takes completely for granted—until he finally has had enough and firmly puts his foot down!

The supporting actor’s portrayal could easily have gotten lost in the clash and clangor of the “bigger” roles in the film, but he’s able to hold his own ground and make his unobtrusive but definite mark with his “shy” but actually savvy depiction.

Other thespic notes: Bernard Palanca was a spot-on choice to play Angel’s rocker boyfriend (and Bea’s ex), and Angeline Quinto was also astutely cast as Enchong Dee’s “unacceptable” (to his siblings)