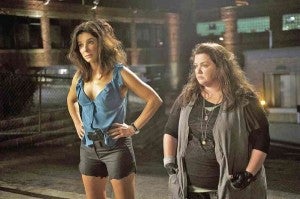 Most cop flicks are testosterone-filled macho capers, with buff, young crimebusters or their still scrappy seniors in charge of the slam-bang action. Particularly popular with action fans are the male screen tandems that are as fast with the wisecracks as they are with their fists.

The current comedy-action flick, “The Heat,” gives the hit format a tantalizing twist by replacing its traditionally male component with a sassy, brassy, female tandem, feistily made up of established star, Sandra Bullock, and big, brash comedic comer, Melissa McCarthy.

They play officers from different sides of the law enforcement tracks, so to speak—Bullock is a crack operative who runs circles around her male “inferiors” by brilliantly using her amazing powers of deduction, while McCarthy gets down, mean and dirty in her much less spiffy part of town, often acting—and swearing—as nastily as the small-time vermin and low life she collars and puts behind bars.

When the flicks’ two lead “ladies” meet, it’s hate at first sight! It’s impossible for them to get along, even if they’re both cops, because each of them represents, what the other abhors the most: McCarthy finds Bullock uptight and uppity, while Bullock can’t stand her plus-sized antithesis’ gutter mouth.

Neither, for that matter can some viewers, us included, because McCarthy’s character swears like 10 truckdrivers, and the notorious and off-putting “F” word sounds like mother’s milk to her!

It takes a while before we can get past the movie’s feistily florid and fetid dialogue track, most of the time courtesy of McCarthy’s character—but, when we finally do, the movie wins us over with its two leads’ sassy, brassy and colorfully copacetic “twin” portrayals.

They certainly don’t look like twins, but the comedic fun and games they instigate are made doubly delightful by the comedic “chemistry” they oh, so obviously enjoy.

In fact, they perform so well together that “The Heat, Part 2” could very well be expected to regale us only a couple of years from now!

What this first film has for plot could be written on a matchbox (mismatched female crimefighters solve big case against all odds, and help each other become better people in the process)—but, that’s OK.  —It’s Bullock and McCarthy’s new and feisty screen tandem’s antics that make the film a fun viewing experience!

Being the film’s fresher stellar component, McCarthy is a sensation here, filling the screen with her plus-sized girth and talent, initially giving Bullock’s fans reason to fret that their screen idol could  be sideswiped and upstaged in the process!

Well, those fears turn out to be unfounded—because, instead of dreading the “competition,” the experienced star embraces it, knowing full well that it could take her into uncharted territory, where she can reveal new facets to her well-known screen persona.

In addition, she comes up with one of the most outrageously hilarious extended drunken binges we’ve seen onscreen—and even gives a hapless gent an instant tracheotomy! (—Huh?!)

Why did her character feel she had to do that? Don’t ask—but, it’s another unexpectedly hilarious moment in the flick that makes “The Heat, 2”—a foregone conclusion!