Agot Isidro sees a shrink–so what?

“I go to a psychiatrist,” confessed actress Agot Isidro, who plays a person afflicted with the mental illness schizophrenia in her latest film project.

The actress said people should not be afraid to seek psychiatric help. “It’s just like seeing your ENT (ear, nose and throat) doctor or cardiologist.”

“I’ve been very vocal about [psychotherapy]. One shouldn’t be ashamed to admit that one needs help,” Isidro told the Inquirer during a visit to the set of the Alvin Yapan drama film “Anino ng Kahapon” at Veteran Memorial Medical Center in Quezon City.

Erase stigma
Isidro hopes the movie can help erase the stigma of mental disorder. “Schizophrenia should be treated like any other disease—diabetes, for example—except that this happens inside a person’s head. He hears voices and sees things that others don’t see. To him, these are valid. People should understand that.”

“Anino ng Kahapon” is about a family dealing with the challenges of a member afflicted with schizophrenia. When Ed (TJ Trinidad) flies to the Middle East to work, he leaves behind Irene (Isidro) and their young son Brian (Carl Acosta) in the care of his brother Carlo (Carlo Cruz) and mother Flor (Upeng Galang). Ed’s departure triggers Irene’s condition. 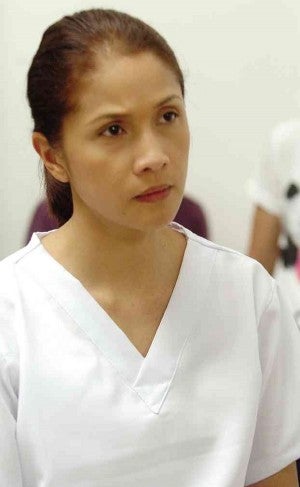 “The [test] is to portray the character as honestly and as truthfully as possible, without going overboard or appearing like you’re crazy,” Isidro explained. “There’s this really difficult scene … the people around me were worried because I couldn’t stop shaking and sobbing afterwards.”

Award-winning director Yapan (“Ang Panggagahasa Kay Fe,” “Ang Sayaw ng Dalawang  Kaliwang Paa”) said the goal of the film was to educate people about schizophrenia as an illness that was manageable and if detected early enough, treatable. To learn more about it, Yapan and his production team visited National Center for Mental Health in Mandaluyong City.

“We spoke with the hospital director, who said that as much as he wanted to improve the lives of the patients there, he could do only so much with the limited budget coming from the government,” Yapan said.

He discovered that mental disorders were not covered by government-owned Philippine Health Insurance Corp. (Philhealth) and that support for facilities for mental health treatment was not among the government’s priorities. 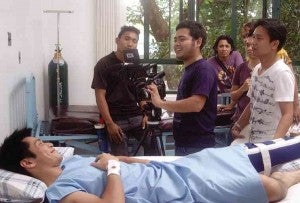 Trinidad was part of the team that visited the hospital. He related, “I didn’t know beforehand that there was no cure for the illness—that was the sad truth. But I also learned that if schizophrenia is detected early, before a patient totally loses himself, doctors can still make him a functioning human being who may even be able to contribute to the community.”

Isidro said the cast members watched videos of actual schizophrenic patients being interviewed, as well as their families and the doctors conducting the treatment.

Yapan said that, as much as the film centers on Irene’s illness, it also tackles the schizophrenia of a nation. He explained: “Irene meets rebels from during the time of martial law. They’ve come back to seek help from her. The film is also a commentary on the reaction of Filipinos whenever asked who among the past Philippine presidents they want to return to power. ”

“Anino ng Kahapon” was written by Yapan, with Alemberg Ang as producer and Gay Ace Domingo as associate producer. It will be released commercially in time for Mental Health Month in October.