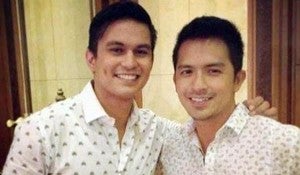 MANILA, Philippines—The possibilities of actors Dennis Trillo and Tom Rodriguez falling in love with each other aren’t that remote, said a recent report by INQUIRER Bandera entertainment editor-columnist Ervin Santiago.

The soap opera also gave birth to a new term, “bekiserye”, which Santiago used in his column.

“Bekiserye” is a word-play on the Filipino term, “teleserye,” a loose translation of “television series.” “Beki,” like “bakla” or “bading” is another colloquial term for male gay.

Santiago reported that based on many show-biz’s insiders speculations, since Trillo and Rodriguez are spending days and nights together for the taping of the said “bekiserye,” there’s a major possibility that they would wake up one day in real life, falling in love with each other.

However in the same report, Rodriguez and Trillo said they are secured in their masculinity and they just brushed off such speculations as part of the rumor mill.

Rodriguez added it’s a unique thrill to be part of the “bekiserye”. He was quoted as saying this is the first time he felt how people have become grateful and were all praises for the said “love team.”

He said at first, he never thought such tandem won’t work but he’s happy he’s been proved wrong.

He said even his parents, who are both based in the US, are proud of his gay role. He said they would regularly send him SMS, saying they were happy and at some point, they cried.

“It’s a wonderful feeling if the people who really know you are the ones who appreciate your work,” said Rodriguez.

Santiago wrote that someone asked Rodriguez if he’s really straight, citing his natural, effortless portrayal of a “beki.”

Rodriguez’s portrayal of “beki” has been so effective even Aiza Seguerra, his former co-star from another top-rating soap opera airing on a rival network, was very convinced of his gay role.

Rodriguez used to appear in ABS-CBN’s noon-time soap, “Please Be Careful with My Heart.” Seguerra plays a lesbian in the said series. In real-life however, she is a self-confessed female gay.

Rodriguez said Seguerra sent him SMS, saying how happy she is for him and “My Husband’s Lover.”

As for Trillo effectively playing the single gay lover, close show-biz insiders said it’s not surprising at all.