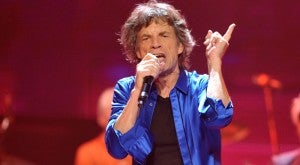 In this Saturday, May 18, 2013 file photo, Mick Jagger, left, and Keith Richards, of the Rolling Stones perform on the “50 & Counting” tour at the Honda Center, in Anaheim, California. AP

LONDON— Rolling Stones fans know you can’t always get what you want. But they may get what they need, with agreement reportedly near between the band and the BBC over televising part of the Stones’ Glastonbury Festival show.

Festival organizer Michael Eavis says the BBC will air about an hour of the Stones’ set as part of its extensive TV coverage of the event.

The BBC and the band both said negotiations were continuing, with the BBC on Friday calling the talks “extremely constructive.”

The Stones are scheduled to headline Glastonbury’s biggest stage on June 29, the festival’s most prestigious slot.

About 135,000 music fans are due at the June 26-30 festival in southwest England. The lineup includes Arctic Monkeys, Elvis Costello, Kenny Rogers and Mumford & Sons.