Vilma Santos stars in her first indie–as a bit player 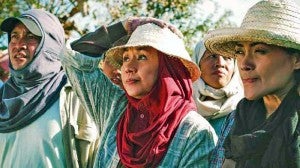 SANTOS IN “EKSTRA.” “I’m still an artist who’s raring for a good challenge!”

“Crowd din ako dati, pero look at me now,” Vilma Santos proudly discloses to other bit players in the trailer of “Ekstra” that swiftly went viral shortly after it was posted on YouTube on June 6. It’s only been about two weeks since, but the one minute and 48 second trailer has already been viewed almost 80,000 times on the video-sharing website.

The buzzed-about Cinemalaya entry, Santos’ first foray into the indie scene, will be the movie queen’s 222nd entry in the IMDb online database! But, the irony of portraying perpetual bit player, Loida Malabanan, isn’t lost on Tinseltown’s Star for All Seasons—who spoke to us not long after she came home from her much deserved vacation in Los Angeles last Saturday.

“I have played so many roles in my lifetime—from Sister Stella L. and Dolzura Cortez to Darna and Dyesebel,” Ate Vi shares. “But, portraying a movie extra is a first for me. In fact, when I acted in my launching movie at age 9, I was already cast in the title role—as “Trudis Liit”!

Shot in 12 days, the film wrapped up its principal photography on Holy Monday, one week before Vilma went on the campaign trail. She says “Ekstra” was a learning and heart-warming experience—and her talent fee wasn’t even discussed: “It’s a personal contribution to the industry that has been good to me. Plus, I wanted to experience the experimental nature of indie filmmaking—nakakapanibago, because of the 12-hour shoots and the dynamic new talents you meet on set.

“Through the film, I want to pay tribute to the indomitable spirit of the bit players. Sa shooting ng mga pelikula ko, I see their difficulties habang umaasam sila na mabigyan ng break someday. During the movie’s shoot, part of the improvisation was for me to spend time with the extras, para hindi sila ma-star-struck—because I had to blend in with them.”

The stellar roster of guests includes Piolo Pascual, Marian Rivera, Pilar Pilapil (who plays Vilma’s idol), Cherie Gil, Cherry Pie Picache, Eula Valdez and “Be Careful With My Heart’s” Richard Yap, who was Ate Vi’s personal request: “We needed big stars to provide the necessary contrast. This is why I’m thankful to the networks, and particularly Johnny Manahan of Star Magic, for allowing their contract stars to appear in cameos.”

Santos’ bold move to take the indie route is getting a lot of traction, especially on social networking sites—and it’s making her nervous. She explains, “I didn’t appreciate the clips from the movie that were leaked early on, because it’s easy for the scenes to get taken out of context—and I didn’t want to generate high expectations we couldn’t meet.” 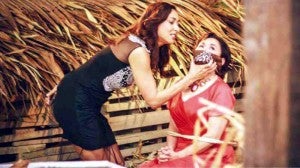 THE STAR for All Seasons (right) with Cherie Gil.

What drove her to “go indie”?  She quickly replies, “For starters, I didn’t accept the role with awards in mind—that’s a false perception. I’ve been yearning to do something different—a character that would allow me to stretch.

“My immediate reality is politics—that’s on top of my priorities now. When my third term as governor of Batangas ends three years from now, I will have spent 18 years of my life as a public servant—and that’s no joke.

“Pero naiinggit pa rin ako ‘pag nakakakita ng mga artistang nagsasayaw o umaarte sa teleserye—you can’t take that away from me, because I’ve been in the limelight my whole life!

“—Also, I want to dispel the notion that I refuse to be deglamorized in my movies. I’m still an artist who’s raring for a good challenge!”

What is it about her character, Loida, that she relates to? Vilma beams, “I can relate to her strength of character. She’s a positive presence—and she never gives up! She works hard, kasi palaging nangangailangan ng perang pang-tuition ang anak n’ya. Kahit naiiyak na s’ya sa hirap, she remains competitive. Kahit pinahiya s’ya, minura, pinaso at sinampal, her optimism keeps her focused and hopeful—like all Filipinos!”

We couldn’t wrap up our chat without asking for Vilma’s thoughts on her landslide victory in the May polls—where she got 95 percent of the votes!

How did she do it? The self-effacing Batangas governor is coy about her stunning feat: “I hope what it means is that I’m doing something right!”