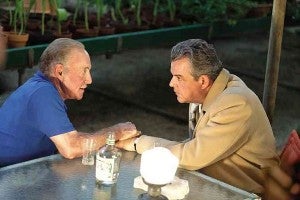 LOS ANGELES–Our recent interview with Danny Huston for his series, “Magic City,” provided a welcome opportunity for us to talk about his memories of his father and grandfather, John and Walter Huston, Oscar-winning director and actor, respectively.

Danny, charismatic and candid throughout our talk at the Polo Lounge of Beverly Hills Hotel, began with anecdotes about his father, the legendary filmmaker and writer behind such films as “The Maltese Falcon,” “The Treasure of the Sierra Madre,” “The African Queen” and “The Misfits,” who died in 1987. (We remember first seeing John as a presenter in an Oscar Awards telecast—an imposing presence with a powerful voice.) Also an actor and a voice talent, John lived a colorful life. He married five times.

Tidbits
“There are tidbits… some of which I don’t know whether I should share,” Danny said, laughing. “I remember an Italian paper that confused the marriages with the number of his films and kids. All the numbers were awry.”

Danny recounted an instance when his father was going through a rough time in one of those marriages: “It was in this very hotel, at the Polo Bar. It was a tough marriage and things were going badly. He checked into this hotel, which was pretty much home to him because he didn’t have a residence in LA. Actually, my grandfather died in this very hotel, too.”

Danny continued: “He’d had a few drinks and looked like he was humiliated beyond belief. I said, ‘Dad, what is it about this woman who did this to you—because you have such a keen understanding of human nature and the inner machinations of the mind?’ He leaned in over his drink and said, ‘She had tricks.’ I said, ‘Tricks? What do you mean, tricks?’ That’s all I am going to say.”

Pressed on about the “tricks,” Danny chuckled and replied, “I wanted to know, too.”

Confusing
He said it was “confusing” for a kid who watched his parents onscreen. “One of the first films I saw was a rough cut of ‘The Bible: In the Beginning’ that my father directed,” Danny related. “He was the voice of God. And he played Noah. My mother (Zoe Sallis) was Hagar. She was dying of thirst in the desert with another child who wasn’t me. This utterly confused me. I suppose everybody’s father is god in a way. But in this film, my father was really God. My mother and the whole thing, the whole biblical element confused the hell out of me.” Laughing, he added, “I must have been four or five years old. I have not recovered.”

Danny has an affinity to Rome because he was born there. “My father was making ‘The Bible…’ in Italy, which had a long preproduction. It was a Dino De Laurentiis picture. That’s why I grew up in Rome; my mother fell in love with Italy. She and my father lived there together. Then he would go off and make films.”

Danny also lived in Ireland, which he described as “wonderful because all the kids were together… and these big, wonderful Christmases.” He chuckled again. “However many wives my father had, he was always a true gentleman to them and wanted all of them around. Sometimes, they didn’t necessarily want to be around each other but he was very open in that way. There were never any complications as far as he was concerned.”

Danny, who also lived in England, pointed out that he wasn’t the LA-stereotype son of a famous person. “I wasn’t aware of my father’s fame in that way. But spending time with him on film sets was fantastic. And the guests he would have in Ireland were fascinating people—the Robert Mitchums, Buckminster Fuller (noted US architect and inventor) and Ava Gardner… My first crush was Ava. I remember telling my mother that and she slapped me in the back of the head and said, ‘Of course, you’re in love— it’s Ava Gardner, for Christ’s sake.’ After Ireland, my father moved to Mexico. There he lived this life as an artist. He painted.”

In Mexico, one of Danny’s favorite moments with his dad was “just playing backgammon and being quiet, just enjoying each other.”

As for his grandfather, Walter, whose Academy best supporting actor trophy was for John’s “The Treasure of the Sierra Madre” (Walter also had two other Oscar nods), Danny said, “In Ireland, we used to pull out this noisy projector and watch Walter Huston films. I must say I’m really proud.”

Two other Hustons, Anjelica and Jack, continue the acting tradition in the family. About Jack, Danny said, “My nephew is doing wonderfully in ‘Boardwalk Empire’ and many other things.”

There was only one time when he felt he was “letting down the family,” Danny said. “I directed a film called ‘Mr. North’ and got a bad review. Basically, the review said John Huston passed the baton to his son Danny, and Danny fell and tripped. “I was like, ‘Oh, God!’ That’s the only way being a Huston can hurt—when you feel like you’re letting down the family.”

Danny, who plays Ben Diamond, the king of Miami’s underworld in “Magic City,” was asked who among the personalities he had met impressed him as a powerful person. “My father would qualify,” he replied. “He was a powerful man with such ease. I suppose that’s the way to play power—just gently, not as if you need to grasp power. The most powerful people don’t push it in your face; they just exude it.”

Simple lesson
His father gave him a very simple lesson as a filmmaker “when I was very  young,” Danny said. “I had a Super 8 camera and I was shooting all these various things. He said, ‘Stop it, stop doing that.’ I said, ‘What?’ He said, ‘When you go from left to right and right to left, what do you do?’  So I looked from left to right and right to left. I said, ‘I give up. What do I do?’ He said, ‘You blink. That’s a cut.’ That was a really great lesson. Concentrate on what you’re trying to say and forget about all the nonsense in between.”

“Working with Mitch is great,” Danny enthused. “I’m just loving it. I’m enjoying Miami. I found an apartment that I really like. It’s white on white.” Chuckling, he quipped, “I walk around wearing a robe and scare people on the streets because they think I really am Ben Diamond.”

Danny had interesting things to say, too, about James Caan, who plays Sy Berman, a Chicago mob leader and is Ben Diamond’s boss: “Working with James Caan is an absolute delight. It is so cool; he’s the real deal. I think his father was a butcher (laughs). As an actor, he’s so unpredictable… so you’re a little bit on edge.”

On playing a villain like Ben Diamond, Danny explained, “You can’t really play him as villainous. You have to find out what it is about him that makes sense to you. And that, in a sense, is what makes him all the more chilling.”

One of his favorite scenes in the first season, Danny volunteered, was when he shot a dog. “So many people have come up to me and said, ‘I’ve got a problem with my neighbor’s dog. Could you do something about it?’ I’m like, ‘Good gracious!’ ”