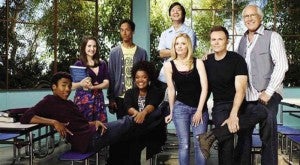 CAST of “Community”: The show is able to experiment again.

Originally inspired by some of “Community” creator and show runner Dan Harmon’s experiences at a community college ages ago, the show almost consistently delivered for three seasons.

Harmon’s absence was felt. New episodes elicited noticeably milder laughs or were just bafflingly unfunny. Hopefully, his recent rehiring will rectify this and other lapses, and defibrillate the beloved show into its original, gut-busting but periodically moving state.

“Community’s” fourth year is shorter. Its first three seasons had over 20 episodes each; this latest season has only 13.

The more compressed set apparently doesn’t allow much room for running story lines, and it has been  quickly wrapping up arcs like the “amnesia” of the villainous ex-teacher Chang (Ken Jeong), and the relationship between geeky Troy (Donald Glover) and independent Britta (Gillian Jacobs).

It expectedly reiterates the family aspects of the misfit group of community college students. Their bond has been tested from time to time, but characters always learned from each other’s gaffes.

Led by the ex-lawyer Jeff (Joel McHale), the eclectic study group has gone through thick and thin, often finding common ground despite their differences. Season 4 addresses Jeff’s abandonment issues. His anticipated meeting with his long-absent father happily made for a somewhat satisfying self-contained episode.

Other characters’ issues are brought to the fore. Abed (Danny Pudi) has the usual quirks and anxieties; Annie (Alison Brie) is still a restless overachiever; Shirley (Yvette Nicole Brown) has marital and maternal insecurities; Pierce (Chase) often wants to fit in; the aforementioned Troy and Britta face compatibility difficulties.

Some problematic episodes already aired had a more scattered consistency and a less-precise handling of humor. Previous seasons saw sturdier, better-paced stories and were able to present and mine situations for hilarity without missing a beat. Season 4 has had episodes that dragged or simply added nothing new to “Community’s” characters.

But the better episodes exhibited tighter, more explorative writing, most apparent in those stories dealing with the gang’s “secret origin,” Jeff’s inner conflict on graduating and his daddy issues, to name a few.

Previous seasons had their clay figure and video game iterations—there were fewer pop culture references and parodies, which were essential “Community” ingredients. But the show is able to experiment again—the characters recently appeared as puppets in an episode.

The Emmy and Golden Globe-winning HBO original series “Game of Thrones” approaches the final stages of its third season with a shocking penultimate episode “The Rains of Castamere,” premiering this Saturday at 9 p.m. exclusively on HBO and HBO HD. The season finalé, “Mhysa,” airs the same time the following week on June 29.

What will you do if your dreams turn into reality?  This is the question that the Tuche family had after winning millions in the lottery.

Headed by Jeff (Jean-Paul Rouve), the Tuche family is considered poor but living a happy life. From the provincial backwater, they move to Monaco, where their lack of style and manners are as conspicuous as their newfound fate. “The Tuche Family” premieres this Sunday at 9 p.m. on CinemaWorld.

E! Entertainment dishes out an exclusive look inside the lives of the forerunners of New York’s culinary scene with “Playing with Fire.”

The series showcases the movers and shakers of New York’s restaurant industry as they work to strike a balance between busy professional and personal lives in a city known for its cut-throat competitiveness, vigorous pace and, of course, delectable cuisine.