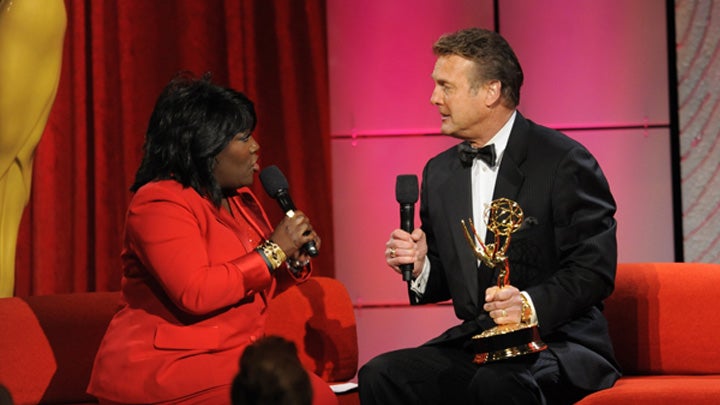 Sheryl Underwood, left, interviews Doug Davidson, winner of the award for outstanding lead actor in a drama series for “The Young and the Restless,” on stage at the 40th Annual Daytime Emmy Awards on Sunday, June 16, 2013, in Beverly Hills, Calif. (Photo by Chris Pizzello/Invision/AP)

BEVERLY HILLS, California— “Days of Our Lives” won drama series honors for just the second time in 40 years at the Daytime Emmys in a rough-hewn ceremony that included more upsets and an envelope mix-up on Sunday night.

The NBC soap opera that began in 1965 beat out defending champion “General Hospital” and former three-time winner “The Bold and the Beautiful,” among others.

The category included the only four remaining soaps still airing on the broadcast networks in addition to “One Life to Live,” which has found new life on the Internet after being canceled.

The show claimed one other trophy: Chandler Massey as outstanding younger actor.

Doug Davidson of “The Young and the Restless” and Heather Tom of “The Bold and the Beautiful” won lead acting honors.

Davidson earned his first career trophy for a role he’s played since 1978. Tom, who previously was on “Y&R,” repeated her win from last year.

Davidson had been nominated seven times in various categories for playing Detective Paul Williams on the CBS soap.

“It suddenly occurs to me that the presenters are younger than my tux,” he said. “I would like to thank the viewers. They have been more than fans, they’ve been like family to me. They’ve supported my character in some very difficult times.”

Tom of “B&B” won for her role as Katie Logan, who struggled with post-partum depression and abandoned her baby in a major story line. Last year, she became the first person to win Daytime Emmys in the younger, supporting and lead categories.

“It’s awesome. I’m so grateful to be part of this community,” said Tom, the fifth woman to win consecutive lead actress honors in Daytime Emmy history.

CBS claimed eight trophies during the telecast, giving the network a leading 21 wins including those from last week’s creative arts ceremony. PBS was second with 14 wins.

The show had its unexpected moments, including Corbin Bernsen uttering two expletives during the in memoriam tribute that included his late mother Jeanne Cooper of “The Young and the Restless.”

The ladies of “The Talk” presented outstanding talk show informative and when Aisha Tyler opened the envelope she quickly realized it was the wrong one.

“Oh, this is interesting,” she said. “This winner is not in this category.”

The audience in the International Ballroom of the Beverly Hilton gasped at the error.

“There better be a cocktail waiting on my table,” Tyler said before being handed the correct envelope from the wings.

Tyler then announced “The Dr. Oz Show” as the winner.

“I was having heart palpitations, real ones,” Dr. Mehmet Oz said onstage.

In another surprise, Scott Clifton of “The Bold and the Beautiful” and Billy Miller of “The Young and the Restless” tied for supporting actor in a drama series.

“It’s fantastic,” Miller said about sharing. “I assumed it was Scott’s. I didn’t hear my name which is why I was trying to sit down when they were pulling me up.”

“We snuck in while nobody was looking,” host Charles Osgood said.

Ben Bailey of “Cash Cab,” which is no longer being produced, picked up his third win as outstanding game show host. “The Price is Right” won game show honors.

Reflecting the current era of dwindling daytime audiences, network budget-cutting and the cancellation of some soaps, the awards show was aired by cable news channel HLN, having lost its longtime home on the broadcast networks last year.

The constant din of audience chatter could be heard on the telecast.

The Daytime Emmys moved back to Southern California last year after being in Las Vegas for two years, and its ratings, like many of the daytime shows it celebrates, have bounced up and down in recent years. Last year, HLN scored its highest numbers ever for a scheduled non-news broadcast when it aired the awards for the first time.

In an effort to liven up the proceedings, the night’s biggest winners were chatted up, sometimes awkwardly, on stage by celebrities right after their acceptance speeches.

“All I could think about was, ‘Please, I got up here without successfully falling out of my dress, so please just get me off the stage,'” said Tom, who had a plunging neckline. “I don’t even remember what I said.”

“One Life to Live,” along with the venerable “All My Children,” ran for more than 40 years on ABC until both were canceled. Each has since been revived online with much of their casts intact, leaving just four soaps still airing on the broadcast networks compared to a dozen in 1991.

“When we started the show, I just hoped for 13 weeks and we passed 50 years,” Hall said on the red carpet about the show that still airs today.

Jess Walton of “The Young and the Restless” joined Bernsen for the in memoriam segment. He dropped the expletives that went out over the air when talking about his late mother.