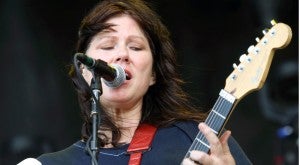 Kim Deal of The Breeders performing at The Hangout Festival in Gulf Shores, Ala. Deal is no longer a member of the Boston-based group the Pixies. AP photo

NEW YORK— Kim Deal is no longer part of the Pixies.

The band announced Friday on its Facebook page that the 52-year-old bassist has decided to leave the group.

The remaining members said in a statement they are “very proud” to have worked with Deal. Black Francis, Joey Santiago and David Lovering also said they will always consider her a member of the group.

The Pixies released their debut in 1988. Their rock hits include “Monkey Gone to Heaven,” ”Here Comes Your Man” and “Letter to Memphis.” They disbanded in the early 1990s and reunited in 2004. Deal was also a part of the band The Breeders, which she formed and worked as lead singer and guitarist.