Black Sabbath is back: Part 1 of 2 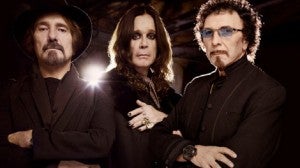 “Black Sabbath are the Beatles of Heavy Metal” is what Dave Navarro once said of them in an article in Rolling Stone to aptly describe the band’s legacy. To most of us, they are the most influential Heavy Metal band of all time and that is not a matter of opinion but a fact. Ozzy Osbourne, Tony Iommi, Geezer Butler, and Bill Ward forever changed the landscape of music as we knew it when they collectively formed a band called “Black Sabbath.”

While some of the younger music aficionados may only have heard of Ozzy Osbourne because of “The Osbournes” a reality show in MTV, for me, the image that was presented of Ozzy Osbourne in that reality show wasn’t a fair or accurate description of him. Instead it was almost like a caricature of his former self. We are talking about the “Prince of Darkness” here, the guy who spearheaded–along with his band mates–a whole new groundbreaking genre called Heavy Metal, and not about an elderly comical figure with a speech impediment because he couldn’t complete a sentence without stuttering. Watching that show was unsettling at times because often you would see Ozzy Osbourne being pranked and made a joke of by clueless individuals who appeared on the show.

When “The Osbournes” mercifully ended its original run on MTV and aired its final episode, it rightfully brought back attention to where it should be and that was to the music of Ozzy Osbourne. At the time, Ozzy had just released another solo album. Yet, an overwhelming clamor for him to reunite with his former band mates was as a strong as ever. Why? Because Black Sabbath made a revolutionary brand of music that was fearless, in-your-face, and which broke all sorts of boundaries of what not to do in making a record. In the process, they influenced countless others to follow in their footsteps.

Fearless and intrepid as they were from the decade they came from, sometimes we forget how difficult it must have been for them to even have had any of their songs received radio airplay. Let’s just say the record executives and label heads weren’t as giving as they are now, and they definitely wouldn’t want to be black balled for signing a band that virtually every label at the time passed on and shunned. Why? Because their music was unheard of during those years, and they were a stark contrast from the happy-go-lucky lyrics of bands at the time, and they were definitely not psychedelic for sure. These guys were on the verge of something big and revolutionary!

So many factors were involved in making Black Sabbath one of the greatest bands of all time. It would be pointless to list them all here. Let’s just say their influence will last long after they are gone and reunited with all the other rock gods watching over us in the skies above. In the meantime, this band that some have forgotten and thought would never release another record again are here to show all of us how it is done.

Read Next
Love, June 15, 2013
EDITORS' PICK
High inflation: Your P1 is now worth only 87 centavos
UK’s Boris Johnson will resign, BBC reports
High-risk pregnancy: Reducing your risk is in your hands
Geek out at TOYCON 2022 powered by Smart Signature
House energy committee chair Arroyo bats for cheap electricity
Unemployment rate up to 6% in May
MOST READ
Suspect in grisly killing of missing woman in Bulacan arrested
Kim Atienza’s daughter flaunts bikini body in response to critics of her ‘revealing photos’
Japanese artist who created ‘Yu-Gi-Oh!’ found dead in the sea
UK PM quits as Conservative leader
Don't miss out on the latest news and information.