When comes a homegrown Imelda musical? 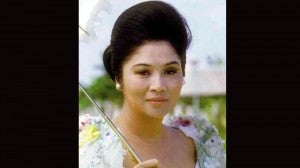 News that “Here Lies Love,” the Imelda Marcos musical biography, is currently being performed in New York, USA, has prompted some people to ask us about the prospects of a homegrown show on the same Imeldific subject matter and persona. —Uh, we thought they’d never ask:

Many years ago, we were minding our own business, directing hit dinner-theater shows for Chito and Au Cobarrubias’ Applause International at the family-owned Hotel Mirador.

Since the shows were so popular and numerous, we were given a room in the hotel, where we stayed for a couple of years. One fine dawn, we were awakened by the urgent and incessant ringing of the telephone in our room.

Was there a fire? Had the Martians landed? None of the above—but the call threw us for a loop all the same: It was “Malacañang calling!”

At first, we thought it was a prank, but the call was passed on to an acquaintance of ours in Imelda’s close circle of confidants, who quickly identified herself and briskly gave sleepy us the lowdown: “They” had been up all night, brainstorming about this and that new project or pakulo, and somebody had chirped, “Why not an Imelda musical?”—and, since we had done a number of hit Filipino musicals, it had been unanimously decided that we should be involved.

—Silence (on our part). Still trying to wake up, we quickly surveyed the possible implications and ramifications of the instant offer: It was a compliment to be chosen, of course, and having read a disallowed Imelda biography, we knew that her real life story would be great stuff for a potentially memorable musical!

—But, wait a darned minute: In those days, Imelda had not yet admitted her disadvantaged past (she would later embrace it as her very own Cinderella story) —so, it was likely that the musical being planned would have to hew to her official biography—and that, we didn’t look forward to doing.

In addition, we were “opposition,” so if her real story could not be told, we wouldn’t be able to summon up the artistic enthusiasm for the “official” version, even if it would be a feather in our cap. (Years later, we did the Cory Aquino musical, and our heart was definitely in the right place as far as that other “political biography” show went!)

After rapidly mulling over these and other considerations, we pleaded a garbled line and asked our acquaintance to call again. Meanwhile, we quickly cracked our head for an “acceptable” way out—better not to sound “ungrateful” for the important invite, you know.

—So, when the second call came, we “regretfully” recalled that we were scheduled to go abroad for an extended time—therefore we would have to decline the invitation to make beautiful musical theater with La Imelda.

In the months that followed, we waited for news about somebody else being tapped to do the show, but there was none forthcoming, so we figured that they had decided to drop the idea.