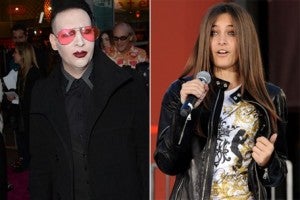 When I got to read about Marilyn Manson dedicating his song “Disposable Teens” to Paris Jackson and how he simulated an attempted suicide onstage in one of his recent live events in the States, that report rang an alarm bell in my head. I got quite disturbed by his callous act and it made me remember the first time—and last—I listened to a cassette tape of Marilyn Manson, an experience that I had chosen to forget for a decade-and-a-half already.

For the younger readers and music aficionados who have no idea who Marilyn Manson is or have never even heard any of his music, you guys aren’t really missing anything and consider yourselves lucky instead. Why? Because Marilyn Manson in the 90’s was one of the most—if not—the most vile, twisted, and demented artists ever. There are things he did not only to himself but to others that I can’t even in good conscience mention and share here because I am well aware that anyone can read this, especially the kids.

While some may think I am exaggerating or don’t know why I am saying this, listen well. These are the things I can say about Marilyn Manson. The guy is a self-proclaimed “Anti-Christ superstar”. He was one of the main leaders of “Hate Music” in the 90’s. Remember the Columbine high school massacre that took place in the States? Well, those shooters were followers and fans of Marilyn Manson. That has been proven and documented already.

And why should all these matter, you ask? Because music is such a powerful tool and it can even be used like a weapon to “brainwash” kids to do awful deeds and self-destructive things to themselves. Its message, if not straight to the point, lies hidden in the songs and grows in time in the sub-consciousness of the listener. Especially of listeners who don’t have a complete grip and understanding of what kind of music they should stay away from and avoid. This goes well beyond double-meaning messages in certain songs. 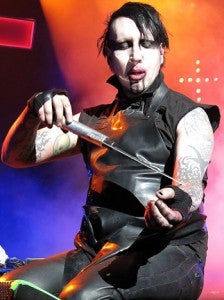 None of the mainstream artists we have today who we can even consider and deem to be controversial can hold a candle to this guy and match in any way the unspeakable things Marilyn Manson has done throughout his career. Name your most controversial artists currently and when you pit them together with Marilyn Manson, it is like comparing poodles to a pit bull.

There are reasons why most music aficionados from my time who also write on popular music do not speak about this guy. There are things that are almost taboo and not worth revisiting and even remembering if it wasn’t only to send a clear message as to what awaits the listener whose curiosity gets the better of him and leads him deep into something that can do so much damage to one’s morals and basic principles.

Corollary to the above, I absolutely believe it was the right thing to do by the legal guardians of Paris Jackson—that is, to not have allowed her to attend that concert of Marilyn Manson. Evil comes in many forms. It can even be spread through music and once it gets a hold of you, it will be difficult to break away from it without a lot of will power and a strong support system. Young as she is at fifteen, Paris Jackson may not have fully understood why she wasn’t allowed to attend Manson’s concert. But her legal guardians know better and sometimes there are certain artists—if they can even be called that—who are best left alone and not get curious about.

In my opinion, I don’t suggest any young or old music aficionado to even listen to his music or watch any of his music videos. Don’t cause my piece to get to your curiosity. It should serve instead as a serious warning to the kids. In my 20-plus years of being a music aficionado, there was only one time that I felt sheer terror and a sense of darkness coming out of my earphones. This happened when my classmate lent me a cassette tape of a yet-unknown artist to me then called Marilyn Manson and the cassette tape he lent me had no album case whatsoever.

The fact that my classmate was surreptitiously handing over to me an unlabeled cassette tape at that should have raised my suspicion and should have made me ask what was exactly the contents of that cassette tape? I, being like 11 or 12 years old, had no clue who the artist was when my classmate said the music was by Marilyn Manson and I had assumed Manson was a female artist. My friend back then was so persistent and adamant that I listen to it because he knew I was well into music. He might have thought I was sort of in to those sort of things. I wasn’t and stupidly, I listened to the entire side A of the cassette tape. That listening experience gave me a whole load of nightmares! I ended up returning the cassette tape right away and at the back of my mind I wished I could just have burned that cassette tape or broken it in half and thrown it away. I promised myself to never ever again listen to music like that for my own good and spiritual well-being. And I have abided by that promise to this very day and I intend to keep it.

In closing, I really hope her legal guardians will continue to protect Paris Jackson. The late Michael Jackson would want only the best for her.