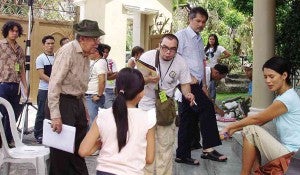 ON THE SET of “Faces of Love”: Eddie Romero (in hat) directs Christopher de Leon and Angel Aquino. PHOTO BY JOEY ROMERO

De Leon counts himself lucky  to have been directed by Romero in four movies—“Ganito Kami Noon, Paano Kayo Ngayon” (1976), “Aguila” (1980), “Kamakalawa” (1981) and “Faces of Love” (2007). Thus, he feels the director watched him grow as an actor—from his days as a neophyte in “Ganito” (only his third year in acting) to his maturation in their first “indie” collaboration, “Faces.”

Says De Leon of Romero: “He was brilliant. He gave me simple instructions on the set. Little did I know that the film we were making would be a classic.”

Considered Romero’s finest work, “Ganito” chronicles the adventures of a young peasant (De Leon) caught in the middle of the revolution against Spain and the resistance against the United States.

Far from being a tyrant on the set, Romero was a benevolent patriarch, De Leon says. “He made sure the team sat together at this long table…for meals.”

Romero worked on “Ganito” at the same time as Francis Ford Coppola’s “Apocalypse Now,” where he was overall Philippine coordinator. In a 2005 interview, Romero told the Inquirer that Coppola allowed him to do “Ganito” only if he would always carry a walkie-talkie, so that the Hollywood director could reach him anytime.

De Leon confirms: “Every so often, he left ‘Ganito’ to report to the ‘Apocalypse’ set. That was why we shot ‘Ganito’ in Laguna, near the set of ‘Apocalypse.’”

As bonus, De Leon got to visit the “Apocalypse” set. “I met Coppola, [and actors] Martin Sheen and Dennis Hopper.”

“When I saw ‘Forest Gump’ years later, I realized that Eddie was way ahead of his time,” the actor points out.

Four years after “Ganito,” they were reunited in “Aguila,” where De Leon played the son of Action King Fernando Poe Jr., another National Artist.

De Leon admits he felt jittery on the set of “Aguila,” a star-studded megaproduction. “My costars were all good. I enjoyed the action scenes— and fighting the Japanese alongside FPJ. But I must confess that I had a hard time in that movie because I had to age three decades.”

Shooting the ending was memorable, he recalls.

At the end of “Aguila,” son (De Leon) finds his long-missing dad (Poe) in the forest, living his remaining days in the village of an indigenous tribe.

“I remember that day vividly,” says De Leon. “I thought that it was the ending that Eddie wanted for his own life. It was his dream to fade away quietly, without fanfare. But he was a National Artist and much-loved in the industry, so that would be impossible.”

De Leon was in Albay shooting the TV5 series “Misibis Bay” at the time of Romero’s passing on May 28.

A year after “Aguila,” they teamed up again in “Kamakalawa,” where De Leon played another “Kulas”-like character, outwitting gods and monsters in precolonial Philippines. “I had fun doing that,” De Leon recalls. “We shot it entirely in Eddie’s hometown of Dumaguete.”

On his free day, the actor decided to go scuba diving, without checking the weather report. He recounts, “There was a coming storm and our boat got swept away. We ended up in [the neighboring island of] Siquijor.”

De Leon and his companions had to hike for 12 hours to get to the port where a ferry could take them back to Dumaguete.

He continues: “The next day, we got back to the set. Eddie was worried sick; he had contacted the Coast Guard. Upon seeing me, he said, ‘Buti nga sa iyo! (Serves you right!)’”

That, De Leon says, made him feel like the mischievous kid caught with his hand in the cookie jar. “That was what our relationship was like. He was a second father to me and he treated me like a son.”

Romero was a contemporary of his parents, LVN actors Lilia Dizon and Gil de Leon. “I looked up to him not just as a director, but also as a friend. I trusted him completely,” says De Leon.

They again got to collaborate six years ago in the indie film, “Faces of Love.” “He was still strong and sharp at that time,” De Leon remembers.

He is glad that the ABS-CBN Archives and Central Digital Lab is now digitally restoring “Ganito.”

“It is part of our history, our culture,” De Leon explains. “It should not be forgotten. It speaks to our countrymen. It’s important for younger generations to get the chance to watch ‘Ganito.’”