‘Deal of the century’ | Inquirer Entertainment

‘Deal of the century’ 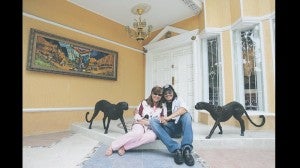 They are the first to admit it’s a major coup in the entertainment industry.

But komiks novelist/film director Carlo J. Caparas and wife/business partner Donna Villa would rather not divulge just how huge a contract it is. “Basta it’s very big,” Villa said. “It’s the deal of the century.”

Caparas and Del Rosario’s Viva Entertainment just inked a 10-year deal that earmarks 50 of the former’s komiks novels for future development. “It could be a multibillion deal in terms of potential,” said Del Rosario.

According to Caparas, some of these titles were previously acquired by TV networks (ABS-CBN produced “Pieta” and GMA 7, “Bakekang”), but ownership eventually reverted back to him. In all dealings, Villa makes sure that Caparas’ premium as author is protected. “[We always] specify that he should be acknowledged and billed alongside the title,” she said.

In the couple’s previous collaborations with TV studios, Caparas also gave his input on the revivals of his works. “I have a good working relationship with both GMA 7 and ABS-CBN,” Caparas said. “They were open to my ideas and promoted my works well.”

“Carlo can add new characters to his existing novels,” Del Rosario explained. “He can create new works if he wants to. And he will have a say in the casting. We can tap Viva’s stable of artists in the remakes of his novels.”

Caparas said that Vice Ganda would be perfect for the novel “Jacoba,” and that Sarah Geronimo is ripe for “Rosenda.”

“Carlo and I go a long way back,” Del Rosario said. “Our first movie together was ‘Dugong Buhay’ in 1982, which featured Ramon Revilla Sr. and Ramon ‘Bong’ Revilla Jr.”

Caparas said, “Maybe now we can do a remake of ‘Dugong Buhay’ with Sen. Bong and his son Jolo.”

Del Rosario’s personal favorite in the Caparas collection is “Citadel.” Caparas said, “‘Citadel’ is my first novel and it hasn’t been adapted for either the movies or TV.”

Viva has big plans for the Caparas catalogue, Del Rosario said. “Our tie-up is multimedia. Carlo and Viva will go into film and TV production, publishing and merchandising. We may tap the Internet, too. New media will play a vital role in distributing Carlo’s works.” (Some of Caparas’ works have been serialized online—“Berdugo,” “Tawak,” “Dugong Buhay,” “Sampung Ahas ni Eva.”)

Del Rosario sees a virtual gold mine in Caparas’ body of work. “Hollywood hit the jackpot with the film adaptations of Marvel Comics novels. Viva is confident with the Caparas catalogue. Apart from the first 50 titles, we plan to add some more novels soon.”

“Santa Niña” is the first Caparas novel that Viva will produce as a drama series, on TV5. “We’ve studied the industry; it’s the right time to develop our titles again,” Caparas noted.

He related that his latest novel, “To Have and to Hold,” which was serialized in the Inquirer, was picked up by GMA 7 as a possible soap opera. “I can work with all the channels,” Caparas said. “Even with Channels 4, 9 and 13.”