Too much information | Inquirer Entertainment 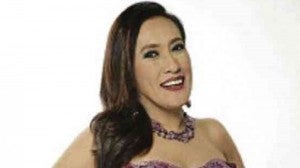 After the fractious and convulsively embattled Barretto family, it’s Ai Ai delas Alas’ turn to alternately regale and turn off addled viewers with her recent 12-handkerchief account of her  marital travails—after only one month of bliss and hiss!

Late last month, on “The Buzz,” she tearfully announced that her spanking-new marriage to a decidedly younger man was definitely over, after too many episodes of physical and psychological torment had made her finally realize that he didn’t really love her.

While the sympathetic viewer initially wept along with her, the excessively emotional account that she offered went on for far too long, until pity turned to testiness.

Yes, sympathy and empathy were definitely in order, but exactly how much more time was needed to bare the facts of the case, enough for viewers to understand its ramifications, and why Ai Ai now wanted out of her ill-advised marriage?

If five minutes were required for that objective disclosure and sharing, why take up 20 more minutes for wailing and sobbing, complete with copious waterworks?

If so, after that oppressive and intrusive shared experience, let us be the first to officially absolve all publicly suffering stars and starlets of that onerous responsibility!

No, you don’t have the weighty obligation to share everything about your private lives and emotional upheavals with us. It’s perfectly OK to keep some things to yourselves, because frankly, while we feel for you as all empathetic humans should, we have our own share of private pains and joys.

That may sound terribly insensitive, but there it is: When you wailingly bare all of your emotions on national TV, the medium is no longer the message. Instead, it becomes the mess-age, so distorted that it appears to be more important than it objectively is, and intrudes into our right to peace and quiet.

Of course, some or perhaps even many viewers would be less sanguine in their protestations. They may even love wallowing in all that stellar sturm und drang, somehow consoled by the realization that, despite their popularity, glamor and pelf, some celebrities lead private lives that are just as miserable and tacky as yours and mine!

They may even be vastly diverted to witness stars suffering in appropriately cosmic ways, as though they were watching a 10-car pileup on the highway—in “delicious” slow motion.

Personally, however, we derive no psychologically warped pleasure from seeing anybody suffer, so we would much prefer it if celebrities in extremis did their pained, true-confessional sharing—as briefly as possible!

Beyond that, it can get to be too melodramatic and self-serving for anybody’s good, and a major turn-off. —Too much information!