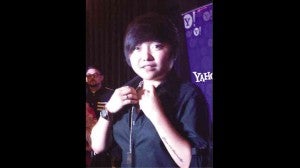 Whenever she comes across old photos of herself—all cutesy and made-up, her hair in pigtails; or looking sassy in short skirts and high heels—Charice can’t help laughing.

No regrets there. “I needed to do all those,” said the internationally renowned singer who recently came out on national television as a lesbian, confirming widespread speculation. At last she felt good, free, at peace, Charice said.

And that’s how she came across when she faced the show biz media at a press con Tuesday night for the coming Yahoo! OMG Awards, where she was given the Media Magnet award.

Gossiped about lately as arrogant and aloof, Charice looked genuinely relaxed, down-to-earth and self-assured. Gone was the American accent that detractors loved bashing her for. She deftly fielded most questions in Filipino, even cracking a few jokes. Asked what she would do with all the girly clothes in her closet, she quipped, laughing, “I’ll put them in a museum!”

Turning serious, the singer said the dresses represented a part of her journey that she didn’t want to forget. 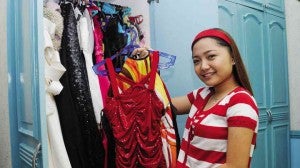 CHARICE can now joke about donating her “girly” clothes (shown in this 2009 PDI photo taken in her Tagaytay home) to a museum. But seriously, she says, they are precious souvenirs of “a part of my journey.” PHOTO BY ANDREW TADALAN

Standing hunched, she gestured with her right hand as she spoke, the left firmly in her pocket when not fidgeting with her Bieber-inspired mop of hair. “There are feminine lesbians and there are butch lesbians. I’m more of the latter,” she pointed out, then added, “with a bit of makeup!”

When it comes to style, one of Charice’s pegs is Ellen DeGeneres. “We’re still experimenting,” the petite Filipina said, probably referring to her stylist, yet unnamed. “My inspirations are Chris Brown and Justin Bieber. We’ll be mixing things up; I’m excited.”

Her coming out, she said, was “a good thing because now my management has a clear idea of how they will market me.”

As for her music, Charice said she was set to move from power ballads to pop-R&B. “I’ve missed performing here in the Philippines,” she said, hinting at coming projects.

Since her “confession” on “The Buzz,” Charice has received overwhelming approval from both local and foreign personalities and media outfits. “I’m so thankful [that] my coming out was met with encouraging comments,” she said. “ABC News, Ryan Seacrest, Billboard, Entertainment Tonight, Perez Hilton— they were very supportive,” said Charice who also received an e-mail from an executive of the now-defunct “The Oprah Winfrey Show.” “I haven’t talked personally to Oprah, but I hope we can meet soon,” Charice said.

Charice confirmed that she was given the chance to come out on the “Ellen DeGeneres Show,” where she brought the house down in 2007 when she sang the torch ballad “And I Am Telling You (I’m Not Going).”  She opted to do it on local gabfest “The Buzz” because, she said, “I owe [it to] the Filipinos.” 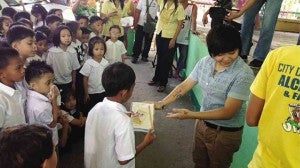 In a 2009 interview, Charice was asked who her crush in show biz was. She picked Sam Milby, saying, “He’s so kind.” Asked the same question on Tuesday, Charice replied,  “Sarah Geronimo… she’s pretty, she’s kind and she has always defended me.”

Probing questions about her love life or being seen with her girlfriend Alyssa Quijano no longer bothered her, she said. Quijano is a member of the singing group AKA Jam. Not that Charice is bent on flaunting the relationship. “I also want to protect her privacy,” she said.

Meanwhile, not all is well between her mom Raquel Pempengco and herself, Charice admitted. “She hasn’t fully accepted… everything,” Charice said. “I know she’s hurting… let’s just give her time. I know things will get better.”