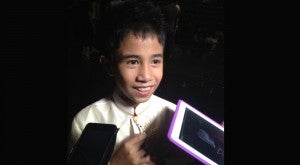 Following Jovit Baldivino, Marcelito Pomoy and the Maasinhon Trio was 13-year-old belter and YouTube sensation Roel Manlangit, who bested five other finalists during the show’s results night at the Pagcor Grand Theater in Parañaque City on Sunday.

“I’m very happy because I won. I want to thank God, my family and those who supported me,” Roel told reporters in Filipino.

The young singer from Valencia City, Bukidnon, shot to Internet fame last year after a video of him singing Whitney Houston’s “I Will Always Love You” outside a local appliance store went viral. The said video currently has over 2 million views on YouTube.

With his powerful rendition of Bamboo’s “Noypi” during the performance night last Saturday, Roel garnered 30.22 percent of the nationwide votes, and received a check worth P2 million.

“We’ll use the money to build a new house,” shared Roel, who lost his home to floods caused by Typhoon Pablo last December.

Meanwhile, the three other finalists who got the lowest number of votes bagged P50,000. They were dance groups Zilent Overload (11.91 percent) and D’Intensity Breakers (11.87 percent), and car drifting duo Lateral Drift Productions (2.44 percent).