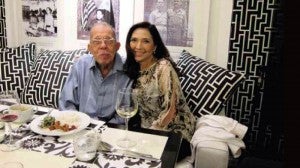 BEFORE they worked together, Chanda said, she would run into Eddie only in family reunions. PHOTO COURTESY OF CHANDA ROMERO

In a string of text messages to the Inquirer, acclaimed actress Chanda Romero paid tribute to her uncle, National Artist (for Film and Broadcast Arts) Eddie Romero, who passed away on Tuesday.

The actress hailed the filmmaker, who had cast her in two milestone films—“Banta ng Kahapon” (1977) and “Aguila” (1980)—as “brilliant.” She recalled, “I got to know Tito Eddie when we first worked together, in ‘Banta.’ Before that, I ran into him only in family reunions.”

Most fondly, she remembered his wit. “His sense of humor permeated his characters’ one-liners. He would sometimes get frustrated when no one could translate his witty quips from English to Filipino.”

He was her mentor. “Working with him helped me believe in myself,” she said. “I wish we had worked together more.”

She gleefully recounted that he almost “disowned” her once, on the set of “Aguila,” which top-billed Fernando Poe Jr. She related, “I was shooting a kissing scene with Christopher de Leon, and we couldn’t do it right. He was furious, and threatened to renounce me. Then we got it right.”

A necrological service for the National Artist is set at the Cultural Center of the Philippines’ Main Theater today, 9 a.m. Interment at the Libingan ng mga Bayani follows right after.