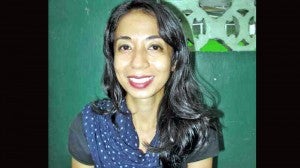 DALENA. Helms “The Guerrilla is a Poet” with her sister.

When we visited the set of “The Guerrilla is a Poet,” codirector Sari Dalena was down with the flu, so we chatted with her sister, Kiri, to discuss their entry for the CineFilipino Film Festival.

Kiri, who was the cinematographer of the 2011 CinemaOne Best Picture winner, “Ka Oryang,”  shares, “I’ve worked with Sari in various capacities—as a cinematographer, production designer, talent, writer and, now, as codirector.”

The multitasking siblings complement each other. Kiri shares, “We’re interested in Philippine history, martial law, living historical figures, and the revolutionary movement. Our collaboration starts before we go to the set—meetings, deciding on the actors, the budget, etc.  We also correct each other.”

The movie was shot in the Netherlands and the Philippines. Kiri interviewed Jose Maria Sison, the central figure of the Communist Party of the Philippines (CPP), played in the film by Karl Medina as the young activist who started the revolutionary movement in the late 1960s. Kiri explains, “The movie sees activists in a different light. During their youth, they were motivated to demand change for our society. We all want peace.”

Dalena has a message for viewers: “Don’t be afraid of the film. The actors aren’t activists, nor are they a part of the revolutionary movement—but, they have learned to appreciate it. We might disagree with the way activists push for change, but they aren’t terrorists!”