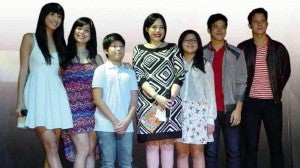 Most stars who belong to show biz families try to play down blood ties to avoid comparison with more famous relatives.

Not Elmo Magalona. The 19-year-old singer-rapper does not shy away from projects that are sure to evoke memories of his father, the late rapper Francis Magalona.

Fans of the original will see FrancisM’s son side by side with the late rapper, as though the two were performing together.

Of course it was done digitally. But it’s the first time that Elmo is sharing the spotlight with FrancisM, who died of leukemia in 2009, a few years before his son shot to fame.

For Elmo, the project is a dream come true. He was only one year old when his father recorded the original song. 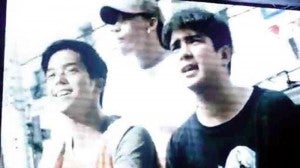 “This is our biggest Father’s Day gift for papa yet,” Elmo said during the unveiling of the video recently. “Since I started in the industry, I’ve been paying tribute to papa. I’m a family person. The  video is family-centered. Tumatak talaga siya (it left a mark).”

According to Pia Magalona (FrancisM’s widow and mother to his six children who include Kapuso stars Maxene, Elmo, Frank, and Saab, plus Clara and Arkin), the project aims to bring together the fans of her husband and the much younger fans of her son. “They’re now [bonded],” she said at the launch.

Pia said they chose the song for the project because they would like to continue spreading its  “message of peace.” She related: “When Francis and I used to write songs, we challenged ourselves. Is there any song that doesn’t mention love? Any song that you write … always boils down to love. ‘Kaleidoscope World’ is about honoring [your roots], respect for other people and diversity.”

“It never gets old. Minahal ang song na ito. Hindi pa rin siya kinakalimutan (This song was loved and has not been forgotten). Many kids today know the song; they can still relate to it,” Elmo added.

He admitted that he still has a long way to go, to reach the level of his iconic dad’s fame.  But Elmo said he was determined to follow in his father’s footsteps in the music industry that the latter so loved. 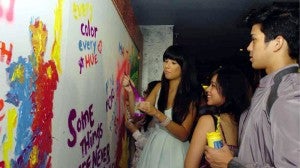 So far, Elmo has not released an album. When he does, he hopes to be able to “replicate” his dad’s success.

As for his show biz career, Elmo said he was determined to avoid intrigues. He insisted that he had no quarrel with young Kapamilya star Daniel Padilla. (Elmo and former singing and acting partner Julie Anne San Jose reportedly made a video making fun of Padilla.)

He would rather focus on his work, he stressed. “Sana wala na lang away (I just hope all the intrigues stop).”

Elmo is slated to appear in a new GMA 7 soap opera. He is also planning to release his debut album by the end of this year.