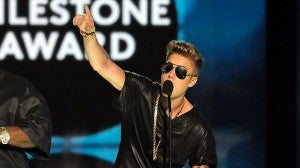 The MGM Grand Arena in Las Vegas, Nevada was home to the 2013 Billboard Music Awards, which aside from its television airing, was also shown on YouTube. Much of the highlights and memorable moments were the unexpected ones, mishaps, and rare appearances. Here are some of them:

Justin Bieber became the first recipient of the “Milestone Award” beating out Taylor Swift and Bruno Mars in that category. Justin Bieber has been raking in numerous awards over the last few years but this one seemed more significant and meaningful than the rest.

At 19 years old, Bieber certainly has become one of the greatest teen stars of all time. That is why I believe he was the proper recipient of such a coveted award from the Billboard Music Awards. To date, he has already five Number 1 albums to his name and that is hard to beat.

As soon as he approached the platform and was handed the award, you could hear the rising swell of boos drowning out the cheers and applause, before he could even get a word out and give his acceptance speech.

It wasn’t the kind of crowd reaction you would expect for one of the hottest artists of today. But the manner by which Justin Bieber handled it showed some measure of maturity and his own resolve to not let things faze him. When he was finally able to give his acceptance speech, there was one line that stuck out and revealed a more emotional side of Justin Bieber: “I’m an artist and I should be taken seriously, and all this other bulls*** should not be spoken of.” 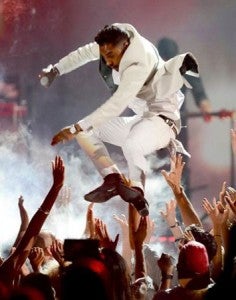 I couldn’t agree more with that statement. I think he gets a lot of undeserved flak just for being who he is.

Instead of that night being a special time in this young man’s life, it became a bittersweet moment for him.

Miguel’s performance of his hit “Adorn” was going smooth until he decided to take a jump from the stage to a platform. But instead of landing on the platform feet first, he accidentally “leg dropped” a fan across her face and could have broken her neck.

The R&B artist admittedly got caught up in the moment. But after his performance, he went to see the said fan backstage who was bruised up but amazingly still in good spirits.

The video clip of Miguel’s “leg drop” became an instant viral hit and trended on Twitter. It has been dubbed the “Leg Drop of Doom.”

Lucky for Miguel, the fan still adores him and he miraculously escaped a lawsuit here. Maybe next time, he should look first before deciding to take a leap of faith. 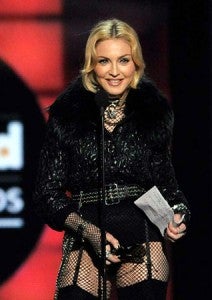 The one and only Madonna, the “Material Girl” and Pop-icon, was awarded the Top Touring Artist Award for her worldwide successful “MDNA” tour covering over 88 sold-out global shows and grossed $305 million.

Before she could be recognized for this astonishing feat and a new landmark achieved in her stellar career, the people in attendance at the MGM Grand Arena were given a montage video of highlights from the concluded ‘MDNA’ 2012 tour. As she approached the podium to give her acceptance speech, all eyes and ears were glued intently on her.

Madonna did make a few striking statements, such as: “It took longer to negotiate whether I could show my a** in that trailer than it took to rehearse for the entire ‘MDNA’ 2012 tour.” Her notorious frankness and racy remarks have made Madonna (in)famous over the decades. It is her personality and not a put on.

Madonna who is a mother of four and is 54 years old, looks like she could have another run. The Pop icon indeed has her place in music history firmly secured.

And let’s not forget what she had on. Madonna wore a see-through fishnet mini-dress displaying her thigh-high stockings and garter belt, which was voted the most outrageous outfit of the night. Her latest fashion effort matched her “vintage” Madonna attitude and is one of the few artists of today that can pull off such an outfit without looking out of place.