Ate Vi overwhelmed by Batangueños’ faith in her 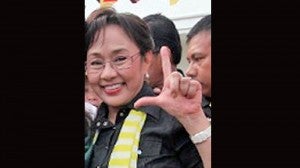 Vilma Santos does it again! Her victory in the elections comes as no surprise. Ate Vi’s track record speaks for itself.

Her grand slam winning streak is not confined to acting awards après tout.

Here is what the Governor for all Seasons says after winning the third time around:

“[I] will enhance and improve our HEARTS  Program (Health, Education and Environment, Agriculture, Roads and Infrastructure, Tourism and Technology, and Security and Social Services).

“Most importantly, I’m so blessed to have a very good mentor, my husband Ralph. I am overwhelmed with the congratulatory messages from my colleagues in politics and also [in] show biz. All my efforts and sacrifices to serve Batangas did not go to waste.”

My heart goes out to my friend from way back, Aga Muhlach. It certainly looks like dirty tricks robbed him of his victory in CamSur (Camarines Sur). There’s public clamor in the province for change, which Aga is more than willing to help them achieve.

Too bad, his opponents didn’t play fair. It seems they don’t know how to follow rules or, in their turf, they make their own rules.

Aga’s dad, (Tito) Cheng, feels sad for his son. “Nakakalungkot kasi yung trend panalo na siya,” he laments.  “In fact, dami na nga congratulating Aga, then sa homestretch may mga hiwaga na nangyari. I consoled Aga and told him to get back in shape and shoot movies and resume taping for his TV show.

“We will accept defeat if we know na talo talaga. But we are not blind. Binantayan namin ang bilangan, but kontrolado ng kalaban ang sistema since they’ve been in power for ages.

Aga was dead set on helping his fellow Bicolanos so he jumped right in against all odds. His sincere desire to improve the living conditions of the people in his hometown made him overlook the power play that had been going on for too long already.

It’s not usual for Ai-Ai de las Alas to cry unabashedly on national television. But the comedienne could not help it. Her fairy-tale romance with Jed Salang turned out to be a nightmare.

It only goes to show that we cannot change the people we love. We can only unmask them.

In her tearful interview with Tito Boy Abunda in “The Buzz,” she said she could no longer cope with their violent fights.

Many love stories ago, I remember Ai-Ai and I would tease each other about our penchant for younger men. She said in jest, “They are good for our complexion but bad for our wallet.” We both giggled like naughty high school girls.

Watching Ai-Ai weep like crazy on TV made me want to hug her. Name it, she has done it for love. L’amour  owes her a better fate because she has always given it her all.