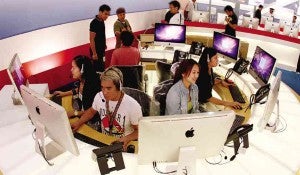 THIS C-shaped work station is one of three “social hubs.”

The Sunday variety program “Party Pilipinas” has been homeless for over a month now.

The Kapuso show broadcasts from the Ynares Stadium in Pasig City, Le Pavillon and SM MOA Arena in Pasay City, or the Philippine Navy Headquarters along Roxas Boulevard. This is because the show’s 100,000-sq-m studio in the GMA 7 compound in Quezon City was converted into a state-of-the art hub for the network’s coverage of the automated elections Monday.

Mimi Yapchiongco, the news department’s senior manager for systems and support, said 14 cameras were installed in the studio, which is now divided into several sections. Apart from the main set are three “social hubs” and a call and data center. On the second level are areas for the weather report and news bulletin, plus the “war room,” or what would be the “nerve center of the election coverage.” 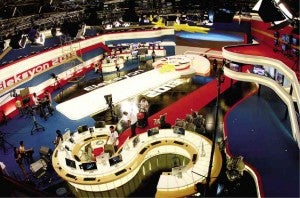 THE NETWORK spent P91 million on the latest equipment and software to furnish this 100,000-sq-m studio.

The network spent a whopping P91 million on new equipment to increase flexibility of camera movements and improve visuals, according to senior vice president for news and public affairs Marissa Flores. “As we did in 2010, we will present real-time data feeds from various sources, primary of which will be the Comelec (Commission on Elections) count.”

Subanchor Ivan Mayrina is “excited and nervous” at the same time. “If the new set is any indication, our election coverage is going to be the biggest,” he said. “Also, with the new technology, we are required to move while delivering the news. We’re used to reporting while sitting or standing up.” 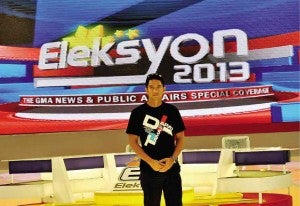 SUBANCHOR Ivan Mayrina is both nervous and excited to try out GMA 7’s new state-of-the-art hub.

The network utilized Immersive Graphics technology to enable candidates to pop up on our TV screens though they’re not physically present in the studio. Yapchiongco explained, “We shot each of them on chroma.” This technology is similar to what CNN used during the US presidential election last year.

“Social media will be a major part of our coverage,” said Flores. “We’ve contracted the services of Mass Relevance, a company that has developed a platform for harvesting, analyzing and visualizing social media content. We are using them in tandem with Vizrt Social TV solution, allowing us to capture real-time feeds from social media platforms and present this on television.” 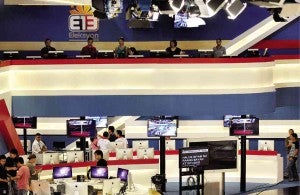 Comments from Facebook and Twitter will be flashed onscreen intermittently, Yapchiongco said. The “hologram effect,” a feature of the 2010 election coverage, will no longer be utilized. “Immersive [graphics] and social media are the trends worldwide. We don’t want to be left behind,” she explained.

Flores added: “We try our best to expose our people to [international] conferences that showcase technological updates.”

In line with this special coverage, GMA launched online talk shows, collectively titled “E13 Hangout,” via Google Hangouts. These are live video gatherings of experts and representatives of various sectors discussing relevant election topics to be conducted over http:// 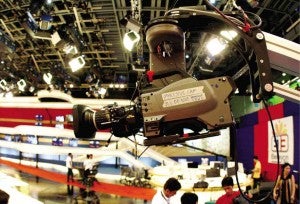 THIS Immersive Graphic camera zooms in and out for a more dynamic presentation.

Released recently was the  “Dapat Tama” anthem, composed and performed by rapper Gloc 9 with singer Denise Barbacena, as well as the updated version of the novelty song “Bilog (Na Hugis Itlog),” which informs the public about the automated election system.