Korn: The fury of metal 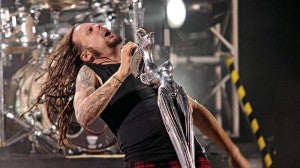 There were two interesting gigs last week: Korn at Smart Araneta Coliseum; and Arthur Manuntag with the AMP Big Band, Skarlet and Cooky Chua at Hard Rock Cafe. We don’t have the supernatural ability to bi-locate, so we watched the first half of Korn’s concert and rushed to Hard Rock later.

The no-chairs setup at the Big Dome’s patron section was perfect for a rock gig like Korn’s – no pesky security men tapping our shoulder and reminding us to “behave.”

The crowd roared like caged lions set free as soon as Filipino band Slapshock opened the gig. Vocalist Jamir Garcia was a commanding presence, ordering the courtside audience to “Get up, get the f— up!”

The first two songs were a screamfest, Garcia hollering like a wild boar being slaughtered. We couldn’t make out the lyrics, but nobody seemed to care; all that mattered was the sound: For us, it was like witnessing possessed souls during exorcism.

But it wasn’t scary since the band was obviously having fun – like basketball players jumping up and down or punks in the moshpit.

A turntablist played intermission music before Korn came on. The mood was upbeat, though some of the songs, like System of a Down’s “Chop Suey,” spoke of suicide and angels dying.

Korn’s entrance. Vocalist Jonathan Davis’ first three words – “Are… you… ready!” – were the first verses to “Blind,” the band’s first single off its debut album. It set the tone for a set of tunes whose intricate rhythms could be compared to complex arrangements in classical music – the only difference being that Korn’s sound slapped the listener instead of swaying him on a hammock.

Bassist Reginald “Fieldy” Arvizu and drummer Ray Luzier provided the power to those rhythms; Luzier’s double-bass drum fills were wondrous thunderbolts that kept us in awe. 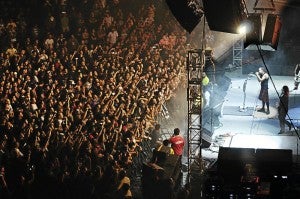 THE NO-SEATS setup at Smart Araneta Coliseum’s court side section is perfect for concerts like this one. magic liwanag

Davis’ voice in “Here To Stay” reminded us of Geddy Lee of Rush. But Davis was, of course, more rough and crazed, summoning the spirits of metal gods from Robert Plant to James Hetfield, wailing like he was about to be engulfed by the fires of hell.

This guy sang with outlandish style – his mic stand was sculpted into the figure of a sci-fi superheroine, breasts and tongue stuck out, said to be specially made by Swiss artist H.R. Giger, who also designed the film “Alien.”

The rhythms bounced on funk-rap groove in “Freak on a Leash.” The song, about alienation and losing one’s sense of freedom, captured the essence of Korn – a band that rebels against conformity, though its lyrics drip with ambiguity.

At this point we noticed that Davis was taking oxygen from a portable machine beside the drummer’s platform, apparently for asthma, which he’s had since childhood.

The next number was a fanciful surprise. Davis emerged with a bagpipe, blowing on it and then singing nursery rhymes in “Shoots and Ladders.” But it had dark undertones, revealing a desire to deal with one’s hidden past. The music’s foreboding sound added to the twisted, somber mood.

Segueing to Metallica’s “One,” Korn’s propensity to explore nightmarish violence was fully exposed.

“Dance with me,” Davis sang in “Got the Life,” and this time a positive view surfaced, affirming for once that there was more to life than just pain and bleakness.

This was one loud concert that did not assault our eardrums because it was properly mixed. One could hear onrushing riffs and drum beats like a landslide was about to bury us alive, except that the debris didn’t fall on our heads.

Read Next
James Franco to direct docu on porn industry
EDITORS' PICK
Leveling up your ‘lutong bahay’ with the kitchen companion you never knew you needed
SM prepares for ‘safe malling’
Notice of 2020 regular meeting of stockholders June 18, 2020
LIST: What to expect in areas under GCQ, MGCQ
Drilon wants repeal of penal provisions in proposed Bayanihan extension law
DOTr bares 2 phases of public transport revival in GCQ areas
MOST READ
LIST: What to expect in areas under GCQ, MGCQ
Duterte approves Metro Manila’s shift to GCQ starting June 1
Hong Kong loses US ‘special status’ — what next?
National Guard called to respond to Minneapolis violence
Follow @Inq_Lifestyle on Twitter
Don't miss out on the latest news and information.